After a Wednesday evening meeting concerning Advanced Two-Way Meters was cancelled by the PUD, Mayor Mike Cooney requested they make a presentation at the Tuesday evening, March 13 City Council meeting with time for public comment from the Smart Meter Awareness Group.

A number of residents filled Chelan City Council Chambers to hear a presentation by Chelan County PUD on their proposed smart meter program for the Lake Chelan Valley. Members of the Smart Meter Awareness Group were on hand to remark about the program.

“As promised I am allowing an option for the public to weigh in,” said Cooney in his opening remark. “We are going to keep it a smart dialogue.”

John Stoll, Managing Director of Customer Utilities for the PUD, gave a detailed slide presentation regarding the PUD’s efforts to bring a smart meter system to the Lake Chelan Valley citing numerous advantages over the standard old meters that are currently in use now. These advantages include:

“We’ve studied this for years,” said Stoll. The PUE installed 6,000 one-way water meters in 2006. The smart meter issue was presented to the Board of Commissioners in 2015 and the plan is to select a contractor in 2019, have Opt-out policies (customers will have an opt-out option) refined and presented to the Commission, and by quarter three of 2020, have the Advanced Meter program installed and operating. “We’ve studied this for 14 to 15 years now,” said Stoll. “This technology has been out there for a long time and is now on its third generation.” 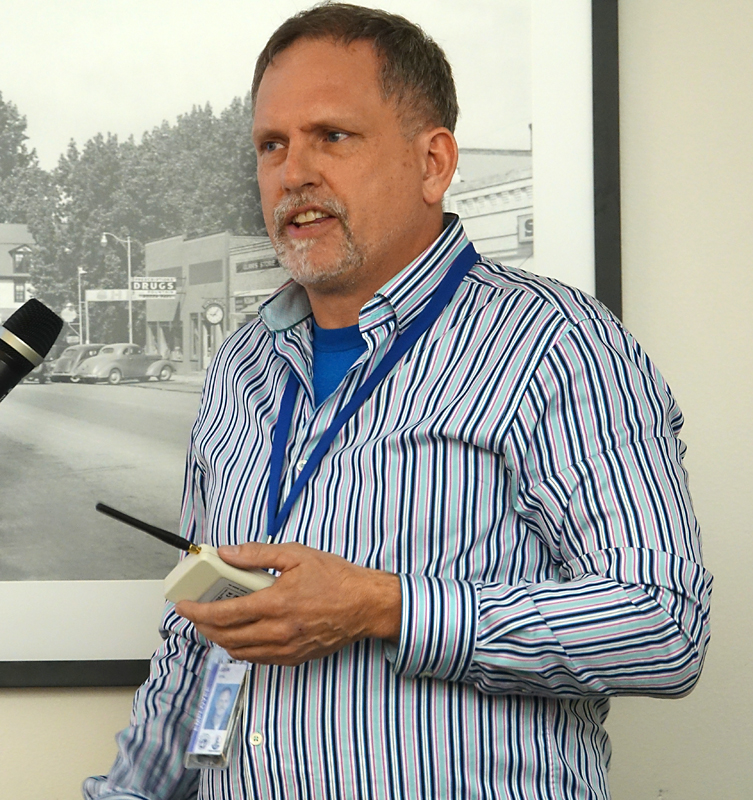 The cost of program is estimated at $13 million with an estimated benefit to the PUD of $33 million over 20 years with a payback period of 14 years.

One of the cost reduction benefit outside of the PUD’s increased efficiency and responsiveness during electrical outages is the identification of High Density Loads (HDL) from crypto-currency mining that is being conducted without PUD knowledge or permits. “Some have played by the rules and are up and running, but others have not,” said Stoll. “It’s pretty much a cat and mouse game.”

The City of Chelan, however, put a moratorium on any crypto-currency mining until they can better understand the issues.

In gearing up for this transformation, the PUD has briefed all elected leaders, held more than 18 community meetings, sent out more than 45,000 direct-mail postcards encouraging feedback and more than 33,000 emails on the PUD’s current email list. There have been three public comment Commission hearings held and the public can research the subject of smart meters at the PUD’s dedicated website landing page  (www.chelanpud.org/advanced-meters).

Customers will have an opt-out opportunity and still have their old meters read by a meter reader, but it will have additional costs related to that service.

The PUD has had pushback from the Smart Meter Awareness Group in Chelan who are genuinely concerned about added RF (radio frequency) emissions to an already large RF output from Wi-Fi and Cell Phones. The PUD reported that 15 minutes of cell phone usage equals about 375 years of advanced meter exposure.

Robin Casal, spokeswoman for the group said they had collected 500 signatures against the smart meter installation that includes five doctors, 20 health practitioners and Ann Congdon, the one PUD Commissioner who voted against the program. “We hope you have looked at the information we gave you and have researched this issue,” she told the City Council members.

She cited RF as an accumulation factor in the increase in cancer, autism and other diseases or issues. “Radio frequencies is a large contributor to this and this would be another addition,” remarked Casal. “It adds to comprised immune systems in children and seniors, adds costs to the health industry and affects our environment.”

She accused the Council of being in fear of disrupting its relationship with the PUD and talked about the liabilities. Others talked about opting out, but didn’t feel they should have to pay extra to opt out.

One of the more interesting comments came from Garett Boss. He stated that two way access opens up the possibility of giving outside people more access to your home. Boss stated that there are programs that can process 16,000 passwords a second. However, no one is going to go to the trouble for nothing. “I’m just saying it can happen.”

Garett Boss gave an interesting take on how smart meters could be hacked.

Councilman Ray Dobbs asked if the opportunity is there to hack into the two way system, has it happened? “Absolutey,” stated Boss. “It’s happened in New York and Los Angeles to turn off power.” Dobbs then asked if the smart meters were smart enough to tell who hack into it? “No!” replied Boss.

Casal brought up the point that the City had promised a workshop and that it hadn’t happened. Mayor Cooney replied that it was setup, but the PUD cancelled and that he was affording the time at a Council meeting for them to be heard. He then told the group that he spent time with the City Attorney and that the City can’t do anything about stopping the PUD’s program. “I wanted the public to have a say, but this is between the PUD and you,” said Cooney. “I hope you feel you got heard.”

Councilman Tim Hollingsworth said the PUD is state regulated and that it is difficult for the City to come between them. Port Angeles is the only City to block smart meters in the state because they own their utility.

City Attorney Quentin Batjer that of all the cities I the state, Port Angeles is the only utility that is city run. “I would urge any action be taken up with the PUD commission. For the city to take any action, it take findings of fact to justify it and at this point would be imprudent of this juncture,” said Batjer. “My analysis is that this issue is a policy issue, not a legal issue.”

Dobbs asked if other technologies were being explored. “Is that something being considered by the PUD?” Stoll replied that RF is the most common technology being used. “The utility has not made up its mind, but the feasibility of using the fiber network is important.”

Dobbs asked Commissioner Ann Congdon why she voted against the smart meter program. She replied that her background was in biology and that she research the issue and felt compelled to vote no, but didn’t want to get into all of the reasons at the meeting.

Mayor Cooney read a resolution that was passed unanimously by the council. It read in part that the Mayor and the City Council of the City of Chelan:

For more information on the advanced metering system go to the PUD’s website
at:www.chelanpud.org/advancedmeters.