Thank you to everyone that showed their support for our Chelan Track Student Athletes this past Thursday. The weather kept up enough for us to host a great night of competition. It started out as a warm early afternoon with some wind coming in after about 5:30 pm.

This was our Senior Night, even though it was early in the year, we held since we only have one meet a year at our facility. We had 9 seniors and I am happy for all of their accomplishments. The Seniors are as follow

They have all done a lot for our program and school community. 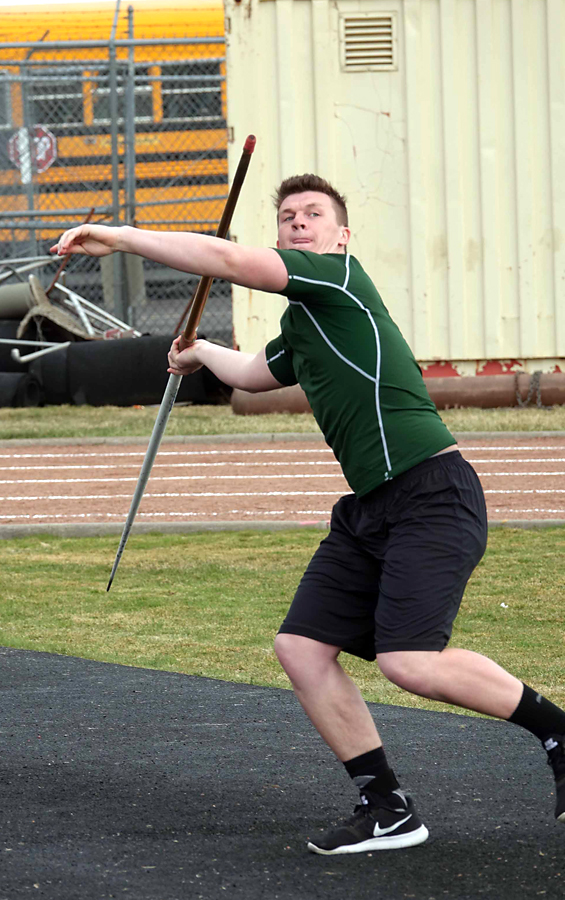 In the discus, our boys performed very well. We had the top 4 spots. Starting with Kevin Cazarez, Alex Neri, Hunter Logan and Caden Bryant. Their throws were as follows; Cazarez – 109 feet 10 inches, Neri – 99 feet 8 inches, Logan – 92 feet 5 inhces and Bryant with 91 feet 5 inches.

We didn’t have a number of our kids do their main events this past Thursday. We wanted to make sure that we honored our Senior Boys and had a good time as well. With that being said, I look forward watching our boys continue to get better and perform better each time out.

We started off with a 1st place finish from Freshman Elly Collins in the 100 meter hurdles. Her time was 17.10 in her first official HS track meet. She also placed 2nd in the Pole Vault clearing 10 feet and only missing 1st place by a few misses.

With enough girls, we were able to put together two 4×100 relay teams and we finished 2nd and 3rd. It was fun to watch a number of girls compete on the dirt track.

Same as the boys, we held back some of the girls and had some fun before we got to Spring Break. Thank you again for taking the time to come to our meet and watch our kids compete. I hope that you get the opportunity to come and watch at other meets as well.

We look forward to Spring Break, a time to reflect and get energized, before we start the stretch run of SCHOOL and Regular Season for Track. We have a busy schedule coming up. We have three invitationals over three weekends and with two track meets per week; It will make for a busy month of April. That is also what makes it fun.

I hope to see you all at the Brewster Relays on the Tuesday when we get back from Break. April 11th and 4:00 pm.

Chelan baseball team took the field on Saturday after a long week of spirited practice to earn two lopsided wins versus a dedicated and committed Omak Pioneer baseball team.

The Chelan bats were alive all day, rapping out 31 hits in the CTL double header. Game one featured three hits apiece for Colt Corrigan, Quinn Stamps and Drake Bird, plus a long home run by Breckin Sporseen.  All other starters contributed at least one hit each in the offensive hit parade. On the mound, Connor Wilson and Drake Bird combined to allow only one hit and one run to earn the game one victory.

In game two, the Chelan bats continued to be hot, with Colt Corrigan belting a home run, and Breckin Sporseen adding his second home run for the day.  Kenny Reeves, Gage Estes, Bryson Darlington each added two hits apiece in the offensive outpouring.

Sam Austin earned the win on the mound, going the distance, allowing only two hits and one run.

Next up:  Friday, 4:30 at home, a non league game against a strong 2A opponent from Blaine Washington.

Chelan Goats Varsity coasted to an easy victory over Omak 23-2 on Saturday.

Taylor Sams got the win for Chelan Goats Varsity. She went five innings, allowing two runs on eight hits and striking out five.

J Utt took the loss for Omak. She went four innings, allowing 23 runs on 18 hits and striking out three.

Chelan Goats Varsity nabbed the lead late in the game in a 7-4 victory over Omak on Saturday. The game was tied at two with Chelan batting in the bottom of the fifth when Leanna Garfoot doubled on a 1-1 count, scoring one run.

Chelan opened up an early lead in the first inning when Jade Hatherell grounded out, scoring one run.

After Omak scored one run in the top of the sixth, Chelan Goats Varsity answered with one of their own.

Garfoot led things off on the rubber for Chelan. She allowed 16 hits and four runs over six innings, striking out one and walking zero.

C Keaton started the game for Omak. She lasted six innings, allowing four hits and seven runs while striking out one and walking one.

Garfoot, Hatherell, Nayeli Zavala, and Lexie Gleasman all had one hit to lead Chelan Goats Varsity.

Chelan Goats tore up the base paths, as two players stole at least two bases. Taylor Boykin led the way with three.

It was a pretty spring day for the Chelan Goats who hosted the Omak Pioneers at the Lake Chelan Municipal Golf Course.

Photo Gallery: https://richarduhlhorn.photoshelter.com/…/…/C0000JLZQhJtbcHI
Chelan hosted Omak today for our first league match of the season. Weather turned out great for March, and the predicted winds stayed fairly calm with just a few breezes throughout the match.
With very little “course-time” under their belts, Chelan’s boys turned in some great scores for this early season match. Leading the way with honors were co-medalists Miles Grossberg (Chelan, freshman) with a 48-38 for an 86, and also with an 86 was Corbin Morley (Chelan, senior) with 47-39. The team score for the boys was a 386 (Omak did not have enough boys for a team score).

For the girls, Chelan senior Emily Christenson took medalist honors with a 53-56 for a 109. She continues to improve each time out; the other Chelan girls struggled a bit, but nothing unexpected for this early in the season. The Chelan girls had a team score of 483 (Omak did not post a girls’ team score).
This Thursday takes us to a nonleague matchup with Quincy on their home course of Colockum Ridge GC, then a break from the action for Easter/spring break.