At last week’s Chelan Fire & Rescue Commission meeting, Jay Weatherbee was sworn in as Tom Peter’s replacement. The commission is back to a full three members, but Jerry Isenhart and Mike Stowe were on hand to let the commission know that a petition was being circulated to increase the commission from three members to five members.

Jerry Isenhart (left) and Mike Stowe (right) were on hand at the meeting to inform the commission that a petition was being circulated to increase the commission from three to five.

Isenhart told the commissioners that he wasn’t there to create an issue, but that moving to five commissioners would be good for the community and give better representation for the fire district.

“My purpose is to advise you about the petition campaign so you don’t hear it on the street,” Isenhart told the commissioners. “It isn’t being done with any animosity but rather as an action to help the District improve its governance by having a broader base of community representation.”

Isenhart explained that he researched the issue (RCW 52.14.015) and found that based on 1650 voters that voted in the last lid levy lift election that the petitioners would only have to collect 165 valid signatures. He thought that over 100 signatures had already been collected.

Isenhart remarked that a special election would cost the District money but thought that the timing of putting it on the ballot could be orchestrated with other election issues to minimize costs.

“I believe that an enlarged Commission membership would give the District more tentacles into the community… and give it better relations with the many areas of the expansive District 7.”

Mike Stowe also spoke in favor of the Commission going to five members. Stowe, who served as an officer on the volunteer force for 27 years agreed with Isenhart’s comments. “It’s about getting the community more involved,” said Stowe.

He stated that there were 111 calls in April which was an all time high. “We’ve had a number of brush fires this year,” said Lemon. He said that the cause of the brush fire in Chelan Hills from Hwy. 150 was still under investigation, but that it could have been a cigarette or other external heat source that started it. “Most homes up there have a pretty good fire break,” said Lemon. “The firefighters got right where they needed to go.”

He also reported on the fire in Apple Acres. “It was fully involved when we got there but the firefighters kept it from spreading.”

Assistant Chief Donnell stated that Memorial Day was very busy. He also stated that all the firefighters have had their red card training and are operational. The District has 27 volunteers; 20 in Chelan, 5 in Entiat and 1 in Orondo and 1 in Chelan Falls.

The Chelan Fire District # 7 Firefighters Association reported that it had given the victims of the Apple Acres fire a $1,500 dollar check and a $500 gift card from Wal-Mart to help them get back on their feet. “These are high priority gifts,” said the director. Accident victims receive $1,000 from the association. The association also gave $500 to the Chelan Food Bank and helps Chelan Valley Hope when needed.

Adam Jones was named firefighter of the year. 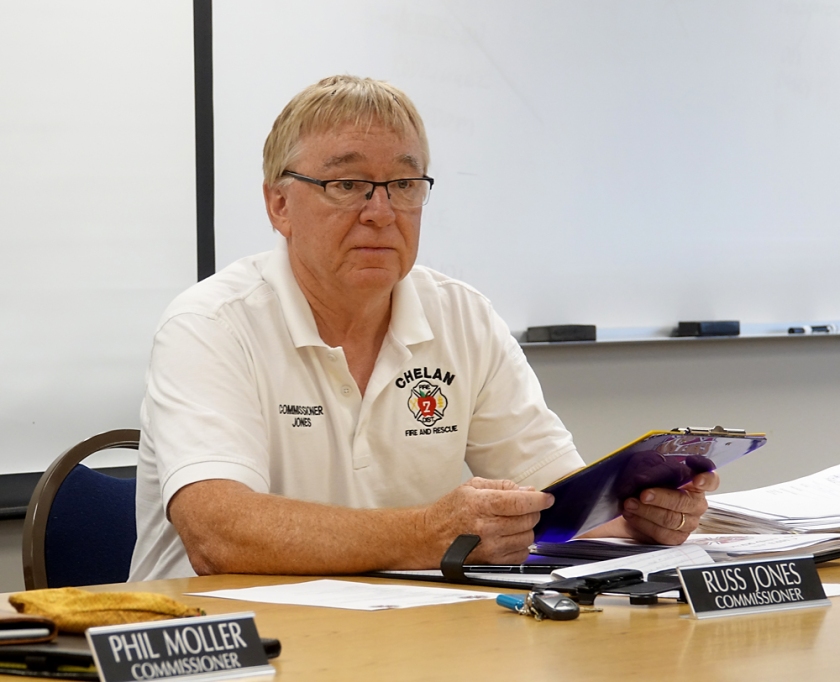 Commissioner Russ Jones wants the District to consider purchasing an old 25 foot Coast Guard boat so the District has a presence on the water for search and rescue operations.

Commissioner Russ Jones said there had been a couple of instances on the water. “We need to adequately gauge the need. We have to be ready to respond (to emergencies).” Jones feels that the solution to the marine patrol situation is to revive the old and successful volunteer program. The Sheriff’s Department has only one unit on the lake covering Chelan to uplake areas.

Jones said that a 25 foot Coast Guard boat is available for $40,000. “It is a $250,000 vessel that can carry a pump and personnel. The top priority is to get rescue swimmers on the lake.” The Sheriff’s Search and Rescue Team do not go below the surface, whereas Chelan 7’s swimmers can free dive to 30 feet. “It is not a lot of money, but we need a tool.”

The Fire Commission will discuss strategic planning at a meeting this Wednesday at 6 p.m.