Fire Chief Tim Lemon outlined and went through the 2019 proposed Chelan Fire District 7 budget for the commissioners during a special workshop on Wednesday, June 20.

He is looking at a one percent increase allowed by law which will add approximately $20,000 to the revenue side of the 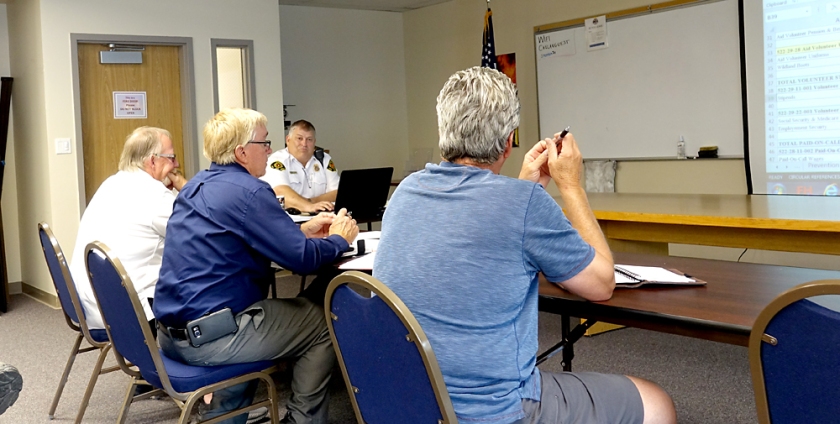 The commissioners went through the line item budget that touched on financial changes in the district.

There is also the possibility of running an election in 2019. Assistant Chief Mark Donnell explained during a telephone conversation that if the citizen’s petition to add two commissioners to the three already seated and Jay Witherbee’s seat also coming open in 2020, the District would have to run an election Would this include a levy lid lift… big question mark. Donnell stated that the cost would be around $16,500.

The District is going to try to retain at least one of the six career firefighters after the grant money runs ot to fill out the department’s need of on call permanent firefighters.

“What is the staffing model we want,” asked Donnell? “It’s best to have four on call, but we can manage with three and it rarely drops to two.”

Assistant Fire Chief Mark Donnell went through the volunteer issues and the need to discuss merging the fire service with the EMS service.

Currently the Department is offering 22 hours of training for its volunteers per month. Volunteers are on average 46 years old. Out of the 19 recruits only six have met all the requirements. “We need to get the rest up to speed,” Donnell said.

The state puts a lot of mandates on fire services for training. “It is tough meeting those requirements. It is a huge commitment,” said Donnell. What he hears from a number of volunteers is that the time it takes is way more than they expected. “We need to find a balance.” Getting volunteers to training sessions has also been hard reported Donnell.

Commissioner Witherbee said, “I’d have called them the next day.”

Donnell replied, “They are volunteers. It’s very clear what that responsibility is. We have to have people we can depend on.”

Commissioner Jones said it is a cultural disconnect from what the volunteer service used to be. Donnell stated that it is not the same as it was before. “It has changed dramatically.” We can’t fix something we are not aware of.

Commissioner Russ Jones brought up the cultural difference between the old volunteer fire service versus the new service which requires a huge commitment on the part of volunteers.

“Well, this is a good introduction to what we are looking at,” said Jones. He then went on to say there were a couple of issues he wanted to get on the table. One was the issue of fire units responding to every EMS call. Chief Lemon said, “I think it would be a huge mistake to back away from that.”

Commissioner Moller stated that he hears it from constituents all the time. “There has to be some options out there.”

Chief Lemon said, “The big picture is to get the EMS into the Fire Service. We’ve had no luck with the hospital sitting down to talk to us.” The hospital has not responded to any contact. “We can’t even get the players to the table,” said Lemon.

Witherbee replied that the community is very protective of Emergency Management Services.

Jones said he was trying to put out things he hears from the community. Donnell replied that he understands constituents talking to commissioners, but added, “They don’t talk to me. My door is open and I’m right inside the front door. I think it would be wrong to not have that conversation. What is it going to take to start that conversation?”

Moller added that in a round about way, the Department is asking to save money and gain efficiency, but Witherbee stated that it might take town hall meetings, and added “it isn’t going to be pretty.”

Donnell added that he felt it was the perfect opportunity to move forward before a catastrophic event happened. “We would like to be ahead of that curve.”

Witherbee replied that any attempt to merge the services will be dead on arrival. “I’ve had these discussions. It is not going to be positive,” he said.

Commissioner Jay Witherbee said it would be difficult to get the community to buy into a merger between the Fire Service and EMS.

The department is also looking at funding for apparatus replacement, but Chief Lemon said, “We have a pretty strong fleet… we just need to keep it healthy.”

It was also noted that the Department is down one staff vehicle and it is costing an estimated $1,400 a month for reimbursement on a private vehicle. “This discussion needs to happen sooner than later,” said Donnell. The cost for a new staff crew cab pickup would run approximately $40,000.

Witherbee asked if it was budgeted. Chief Lemon said it was.

Moller asked if it could be rigged with a snowplow, but Jones stated that the plow needs to be discussed a little bit more. It is costing the District around $1,300 for snow removal services. 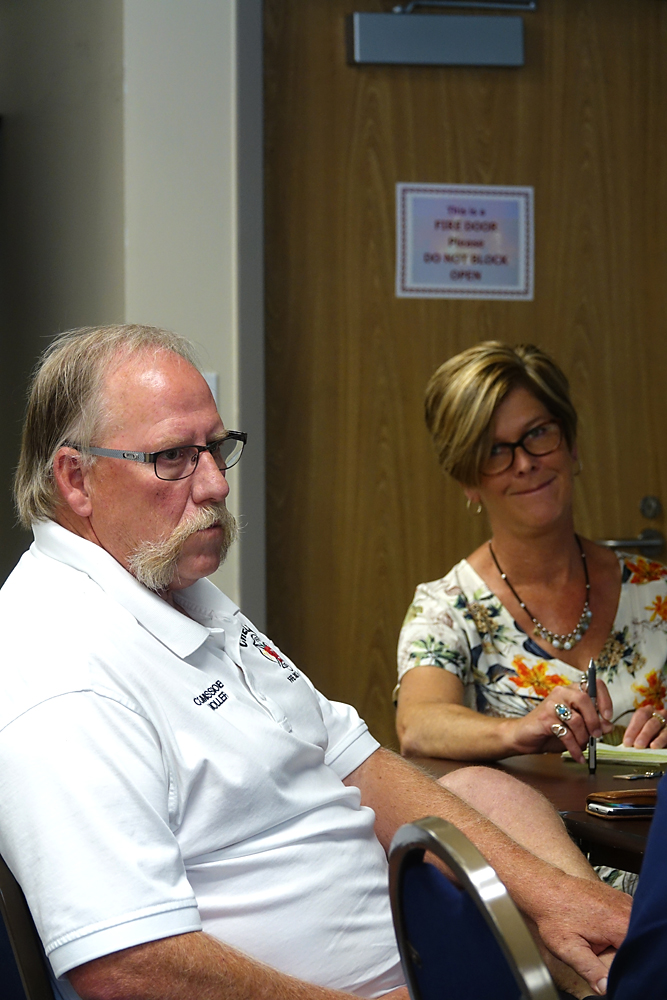 Commissioner Phil Moller would like to see a discussion about a merger with EMS.

In final comments, the Chief said the next workshop topics should include what the department’s staffing was going to look like and the impacts on the fire service. “These are viable things to discuss,” said Lemon.

Jones said it was unusual to not have the conversation with the hospital. “We have to find ways.” Witherbee added, “We need to sit down… I’m ok to sit down with them and look at the Fire/EMS model.”

Jones also suggested that if there were ways to move volunteers into a career position that would provide additional incentive.

The other issue is how to educate the public about the Fire Service. “We don’t have the funding to hire a PR person but maybe we could establish a position for a volunteer for that purpose,” said Jones.

Witherbee stated that the executive summary that came out of the task force was good. “They said they love the service but didn’t want to pay for it. It was voted down (last levy lid lift) and they don’t see the consequences… or the direct impact. They are going to see (eventually) the difference. They are going to see a drop in the level of service.”