It was a very passion filled meeting last night, Monday, August 6, as proponents and opponents gathered at the Chelan Fire Station to give input as to why or why not to re-run Fire Levy Lid Lift that failed by a 60-40 percent vote of the public in April.

Chelan County Fire District #7 Commission Chairman Russ Jones laid down a few ground rules prior to opening up the meeting to the public in attendance. “There is not a predetermined outcome to this meeting,” Jones told the crowd. Each person who signed up to speak had five or less minutes to do so.

The primary ground rule was to be respectful of everyone’s opinions. Only when some of those in attendance cheered after the first proponent spoke did Jones have to remind them to restrain themselves.

The Commissioners have been under a lot of pressure from District personnel to re-run the levy to save the six fire fighters who will lose their jobs in December when the two year FEMA SAFER Grant runs out.

“What this is about is what staffing the community of Chelan wants for its Fire District,” said Jones. He explained that the ideal situation would be to have four career firefighters at the station 24/7. “That allows for entry into a building that is on fire.” Jones also stated that response time from the Station is obviously faster than someone responding from home.

However, Jones went on to say that even with the 12 career firefighters on board now, that the administration has to fill a lot of shifts with stipend volunteers because of vacations and time off periods. “Presently, about 60 percent of those shifts are being filled by volunteers,” said Jones.

The proponents have been arguing that the loss of these six firefighters will severely impact the public’s safety.

The opponents argue that the District needs to work within their budget and rely on the six remaining career firefighters and volunteers.

The first opponent to re-running the levy was Jeri Dowell, who, at one time was the only paid professional at the fire department when it was all volunteer. Jeri stated she was not in favor of re-running the levy, stating that the voters had already spoken. “We heard from them clearly,” she said. She added that people are getting taxed off their property and asked that the District go back to their budget and work with it.

Mike Stowe, a past volunteer firefighter and officer at Chelan 7, was also in opposition. “The problems we are facing today started several years ago before you were ever on the board,” he told the Commission. “The budget has not been sustainable and, unfortunately, you three are now stuck with the aftermath.” Stowe went on to say that he feels the taxpayers are educated on the situation and cast their votes accordingly.

“The mission should be simple… deliver fire services and support, support medical services. They (fire personnel) don’t need to go on every single medical problem.” Stowe feels strongly that a volunteer fire department needs to be at the heart of delivering fire services to the community. “I have faith in the volunteer system… I think all we need are three or four trained staff and occasional wild land firefighters.”

Dan Crandall, a former volunteer with the department said he has an insider’s view of firefighting. “I looked at my taxes and said ‘Good Grief’, but $25 dollars more a month is well worth it and I would gladly pay it for the safety of my community.” He asked that the commissioners put the levy back on the ballot and hoped that it passes. 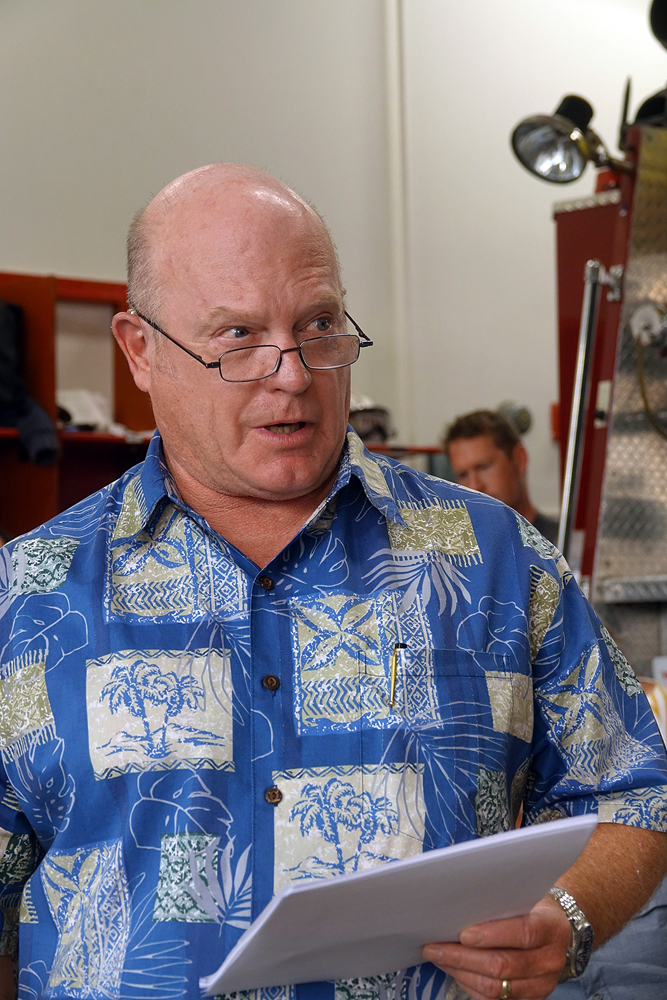 Past Fire Commissioner Tom Peters made a strong statement against re-running the levy to retain six firefighters.

Tom Peters, a past commissioner, talked about the hiring of a consultant and getting the advice of a group of citizens to establish a long term strategy and plan for the department. “I, as chairman of the board, was instrumental in selecting an outside consultant to lead this effort,” said Peters. He added that he feels the consultant did a poor job and the product from the Citizens’ advisory group did not provide the department with a strategy for the future “or a solid foundation for building a responsible plan.”

He did agree to allow the levy lid lift on the ballot in April, primarily to hear directly from the community on whether or not they were in favor of supporting six more full time firefighters on an ongoing basis; and, if not, to allow the six SAFER firefighters time to find other employment.

Peters went on to say, that as a citizen, he could not support any levy lid lift that does not represent a balanced, affordable plan that meets the needs of the district. Nor does he believe that the community can afford six additional paid firefighters, the apparatus due for replacement and the improvements needed at the facility.

In conclusion, Peters said, “Let’s give our fire department administration and the board of commissioners the time necessary to build a plan that makes sense and that all the citizens will be best for the community.”

Larry Peabody, a retired firefighter from Kirkland was a strong proponent for re-running the levy in November.

Larry Peabody, a retired firefighter from the Kirkland who has moved to Chelan and is in support of putting the measure back on the ballot. “In my opinion we are at a crisis point in Chelan in regards to delivery of emergency services… kinda at crossroads,” said Peabody. “Response time by appropriately trained responders are essential to deliver of fire services.”

Peabody went on to say that if this community doesn’t take care of its immediate crisis, lives are going to be lost and property is going to be endangered. “That’s the bottom line,” said Peabody.

Don Dryer, President of the Chelan Hills Homeowner Association stated that the community needs firefighters. “This isn’t 60 years ago… 12 years ago. We need to bring the levy forward,” said Dryer. “This is about the men and women who put their lives on the line. We can’t continue to live in the dark ages. I hope you vote in favor of the levy. It is not a lot of money to save a lot of lives,” he stated.

John Gordon, a past fire commissioner of Chelan Fire 7 asked the current commissioners to look for alternative funding sources outside of running a levy.

John Gordon, a past fire commissioner at Chelan said he is really big on volunteers. “Small towns across the nation are all volunteer driven,” said Gordon. He urged the commissioners to look for alternative funding sources. “Think outside the box… look at a hotel/motel tax… a bed tax,” he suggested. “Charge them (the tourists) a little bit. I encourage you to go that route. People aren’t ready for another levy.”

Ann Clark, a fire association member said she likes Option 4 where additional seasonal firefighters are put on. “Commissioners are responsible to serve the community in a safe way. Change is inevitable.”

Steve Garvich, a volunteer at the department, talked about the number of hours a volunteer needs to be trained and the number of drills (12) per quarter they need to attend to be active. “It is a real commitment,” said Garvich. “To be honest, I’m 65 and 30 percent of us are over 60.” He went on to laud the career firefighters as knowing what they are doing and the fact that they are physically able and have the stamina to do the job. He asked the commissioners to put the levy back on the ballot.

Mark Babcock, another retired firefighter, stated that he was also in favor of putting the levy back on the ballot. “This place is growing… it’s growing a lot. People are looking at Lake Chelan and tourism is also growing.” He went on to say that volunteers have a place in the department and need to be available to support the fulltime firefighters. However, he added that it is impossible for volunteers to get to a situation in time.

“We have to solve this. You have to keep the six firefighters. I don’t see how you can’t,” said Garvich.  His wife, Lisa was also a strong proponent of putting the measure back on the ballot.

Jacklyn Dalton, is probably one of the most passionate residents about retaining the six firefighters said that only half of the registered voters voted in the last election and she felt it was important put the issue back on the ballot.

Robert Watson, a south shore resident told the commission that a lot more thought has to go into the department planning before running any new levy.

Robert Watson said he has great respect for all firefighters, paid and volunteer, but that while Chelan has a huge population in the summer, it is a small town in the winter. “I can’t keep my employees in the winter,” stated Watson. “What do the firefighters do in the winter… no one has an answer. Let’s think this out. I’m all for a strong fire department. I think a little more thought needs to be done here.”

Taylor Rains, a department firefighter said, “People look at this as just six guys. In December we sent people to California to help out,” said Rains. He then encouraged the commissioners to put forth a resolution to put the measure back on the ballot. 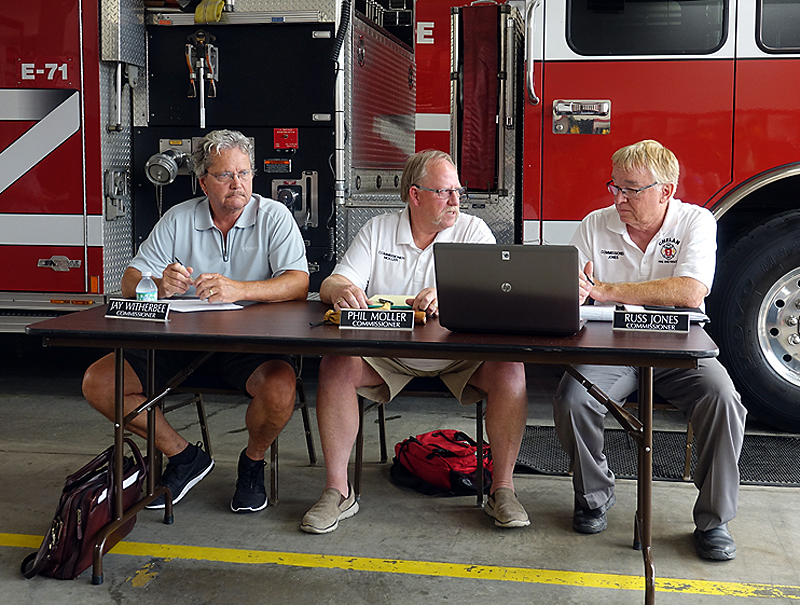 Neither Jay Witherbee (left) or Phil Moller (center) seconded a motion by Chairman Russ Jones to put a new levy lid lift on the November ballot to raise the department’s property tax collections from $0.92 cents per thousand to $1.18 per thousand of assessed value.

Commissioner Phil Moller said, “My position has not changed. I think we can accomplish the need with the current budget, so I will have to vote No.”

Commissioner Jay Witherbee said, “Voters have given us a clear direction. We need to look at other options.” He felt that a levy might be possible in 2019, but not this year. Moller replied that he felt the department could retain three of the six, but Witherbee said, “I don’t know that.”

Chairman Russ Jones put forth a resolution to retain three firefighters by putting a levy lid lift on the ballot that would raise the amount the fire department receives from property taxes to $1.18 per $1000 of assessed value. “That would allow us to retain three firefighters and put $150,000 into the apparatus account.” He made the motion and called for a second which didn’t come from either Moller or Witherbee, so the motion failed and the department is back to working out details to live on their current budget. 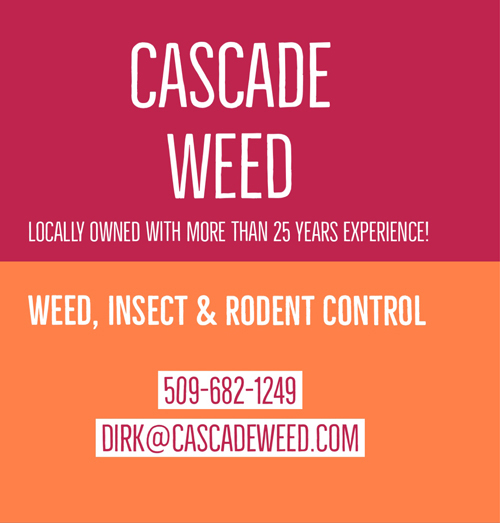