At the Chelan Fire Commission meeting on December 12, an issue concerning the need for and purchase of a 25 foot Defender boat surplused by the U.S. Coast Guard for $5,000 came into question.

The boat in question is sitting in the Fire Department’s parking lot, albeit, it is not paid for yet, but Commission Chair Russ Jones was given approval to spend $5,000 on a boat for Chelan Fire and Rescue by the previous commissioners.

$5,000 plus two new power plants and this Defender could be fully operational and ready to help with any water emergency on Lake Chelan in any type of weather, but two commissioners are not happy with this potentially life saving addition to Chelan Fire and Rescue.

The boat in question was originally built for Homeland Security purposes and was recently put on the Coast Guard’s surplus list without engines. “This is a boat that can deliver a rescue-swimmer in any kind of weather on this lake,” said Jones. 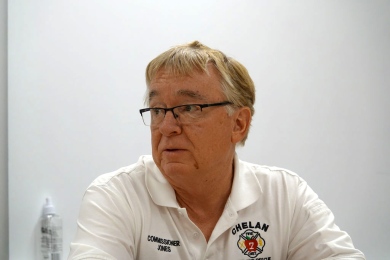 Chairman Russ Jones has been a major proponent for Chelan Fire and Rescue to have an operational boat on Lake Chelan for its rescue-swimmer program and any other function it could be used for.

It needs two high power outboard engines that would cost the District somewhere between $7,000 and $9,000 and a part of the Coast Guard’s deal is that the purchased make the boat operational and keep it for 18 months. As it sits, this boat, which is decked out with electronics and cabin chairs amongst other amenities, is worth about $30,000 + on the open market.

Commissioner Phil Moller is against the District adding a boat to its rescue operation calling it a bucket with a hole in it.

Commissioner Phil Moller called the purchase of a boat for Chelan Fire and Rescue nothing but a money pit. “I don’t know why we are looking for a boat,” said Moller. He also didn’t see any money set aside for a boat and/or the need for it.

Chelan Fire and Rescue has a rescue-swimmer program, but no method to transport them to an emergency scene. “We would have one year to make this boat operational,” said Jones. “As a fully operational craft, the Defender would be worth between $110,000 and $150,000. Our obligation is to make it operational.”

Jones also stated that EMS and District 5 are interested in partnering with Chelan on the boat. “It will cost us some money to get it operational, but it is a pretty decent opportunity.”

Chief Donnell stated that there were a number of issues to consider like its impact on the budget, its operational status and the amount of training to get the pilot up to competency, but also stated that it would be another tool in the tool box

Phil Moller stated that he sees the capabilities but is concerned about the maintenance issues.

Russ Jones said saving even one life on the lake in 10 years would more than pay for the boat.

In addition, the current situation with the Sheriff’s boat is that it takes at least 1.5 hours to become operational and on site of a boat accident, and that the Sheriff’s Department can only use sergeants to operate their boat.

Jones added, “I think it is a no brainer.”

Moller replied that is isn’t in the long range plan and couldn’t support purchasing the boat especially when the District is replacing its ladder truck at a cost of $175,000.

Commissioner Jay Witherbee also doesn’t support the purchase of this boat and said, while he understands Jones’ passion for it, the District can’t be expected to save everybody, every time.

Commissioner Jay Witherbee said he didn’t see a risk of getting the District’s money back and if there was a long range plan, the District could go after grant money. “I understand the passion for it, but we can’t save everybody, every time,” said Witherbee.

Jones asked to table the conversation and decision until the next meeting. Moller continued to state his objection and is concerned about the cost of making the boat operational.

The discussion was tabled until the next meeting.

The District is in the process of purchasing a new (used) Ladder Truck. The current ladder truck has ladder issues that cannot be remedied without actually manufacturing parts.

A ladder truck has been found in Alabama for an asking price of $195,000. “They are willing to accept $175,000,” said John Goyne, the District mechanic. “It has better ladder hydraulics.”

Chief Asher chimed in and said the truck has a 2,000 gpm pump, an ITI ladder, comes with a lot of pullout trays, a basket holder and includes a vertical standpipe with a 2.5 inch discharge. “We can actually pump right through the truck,” said Asher. It also includes an on-board generator. “It’s got a lot of good things and would serve us well,” added Asher.

The selling company will go through the process of certification and the truck also has a one-year warranty. Chief Donnell added that this will be a very good unit for the District.

The District flew both Goyne and Asher to Alabama prior to Christmas to check out the unit. No information has been forthcoming from that visit yet.

Entiat, Orondo and Chelan are getting 97 Scott air bottles under a new grant. These larger bottles offer a safety zone and work off of a high pressure air system.

Mayor Cooney spoke at the Commission meeting about an effort to conduct a fire prevention program for the safety of Chelan. “This would mainly be driven by the Fire Department and City,” said Cooney. “We just need to figure out  the best way to do that.”

Fire Chief Tim Lemon reported that the District has received $584,000 in property tax receipts, $52,000 for a solar grant and $25,000 for a illegal burn fine. “Our expenses are a little higher because of our staff buyout program.” The District has lost several full-time firefighters off the Safer Grant. 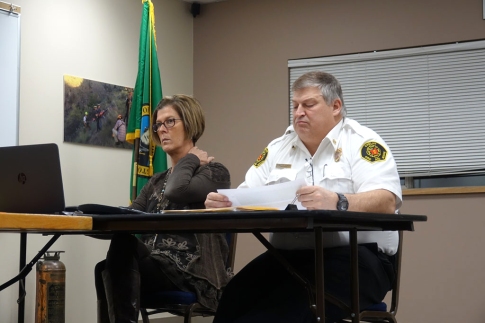 The State’s L&I rates are expected to be around $16,000 in 2019. “The lower the experience factor, the high the L&I rate,” said Lemon. “It’s up there in the thousands. It ran to $34,000 through October. It is a dramatic change when you get into high risk activities”

Last month the District had for working fires; three within the District and one outside in Orondo. They also responded to 54 calls in November. This is five percent increase over last year.

Chief Donnell reported that it is slowing down for the winter months, but is working on how the District will manage its operation going forward with the loss of Safer grant employees.

He also reported that an in-house EMT class will begin in January.

Chief Asher and Donnell (right) both gave reports on the District’s operations.

Chief Asher reported that recruitment has been steady and they are now up to 17 volunteers; nine in-house, six in Entiat and two in Orondo. Asher is paid through a Safer grant to increase volunteers in all three districts. “We lost one long-term volunteer this month.”

The District has two stipend positions open for January with a lot of open spaces in the 24 hour cycle to fill.

Dan Crandall said the Firefighter Association is ending 2018 with $30,653. “We took in less than we spend,” said Crandall. “Most of our expenditures were for victims of fire or accidents plus a department purchase.” The Association purchased emergency airbags at a cost of $8,000 and Crandall reported that they were on hand.

Crandall also reported that he will be returning as the President of the Association in 2019.