As usual, Tuesday’s (May 28) City Council meeting was full of interesting bits of information relevant to the community.

First off, the council was hit with another discourse by Mayoral hopeful, Stan Morse, on the dangers of wildfire affecting his neighborhood. However, this time Mr. Morse hit upon the fact that over Memorial Day, the City and Sheriff’s Department barricades certain residential streets behind Safeway to keep people from accessing those areas where there is no fire danger, but allows visitors to park in the Lakeside neighborhood. “You do exactly that in that corridor in town,” said Morse

Stan Morse was back on Community Comments at the City Council meeting asking the Council to consider closing streets in his neighborhood to visitor parking.

Morse went on to complain that during the summer months, Lakeside is inundated with cars parking in neighborhoods. “It’s only a matter of time when a converter sets off a fire in our neighborhood. It is actually a threat,” stated Morse. “You park so many cars it is impossible to get a fire engine around the corners.” Morse asked them to put some “Local Access Barriers” in his neighborhood.

John Olson also addressed the Council and discussed the seasonal community shuttle service that will be coming to Chelan in July and operating through September. 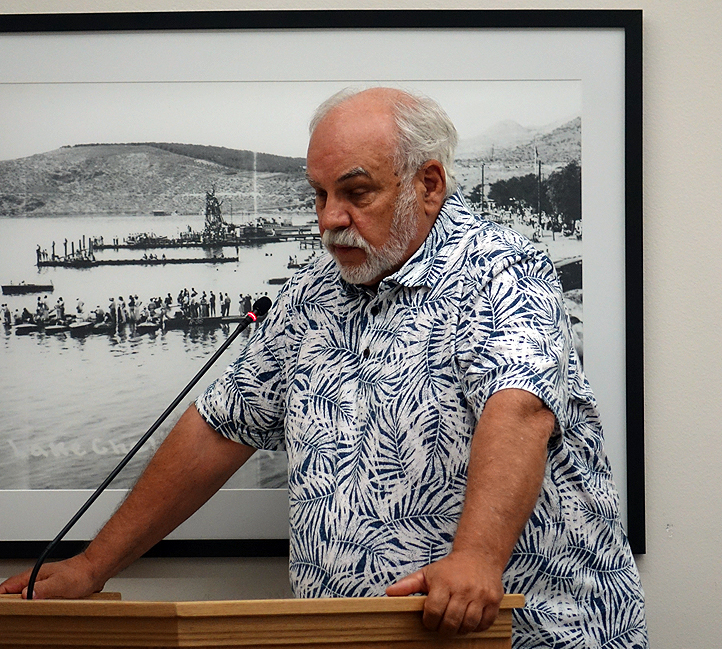 John Olson told the Council that the City wasn’t prepared for the future.

Olsen told the Council that the City and Valley are not prepared for the future, but that he wanted to address one issue… transportation. “Chelan has basically the same highway system today as it had when I was born here 72 year ago,” stated Olsen. Both highways meet in the middle of town and Olsen stated that during the summer months, traffic was becoming very bad. “Alternatives need to be sought.”

“We must get serious in getting people out of their cars and getting cars off the streets and out of the core of the town,” he stated. Olson feels the LINK seasonal Chelan Community Shuttle will be a huge step in that direction.

His other comments concerned the lack of public lake access. Olson pointed out that Wenatchee, Chelan Falls, Entiat and Pateros all have large amounts of waterfront dedicated to the public, but that Chelan seems to be out of step with the public’s need for more lake access.

Olson brought up the Three Fingers as a possible goal for the City to pursue instead of trying to spend $6 million on purchasing property on Chelan Butte.

Two special presentations were on the agenda:

Lacy Lybecker – Carirdeas Winery, Shane Collins – Rocky Pond, Denny Evans – Tunnel Hill, and Cheryl Nelson – Tildio Winery were on hand at the meeting. Lybecker spoke for the group and stated that the 10th anniversary celebration of the AVA would take place in the second week of June. “There will be educational and social opportunities for the public,” said Lybecker. The Chamber of Commerce will be hosing a tasting seminar and 23 wineries and a number of restaurants will be involved.

The Council held a Public Hearing on the proposed Six-Year Transportation Improvement Plan that is required by the State. 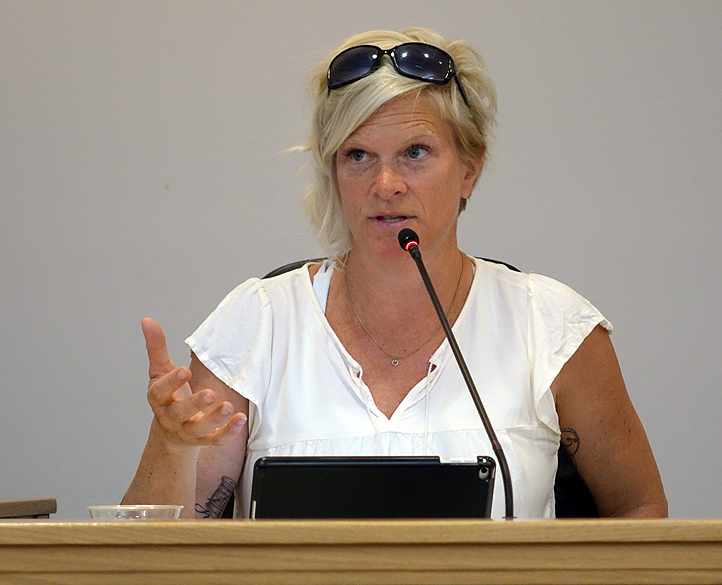 Councilwoman Erin McCardle
Councilmember Erin McCardle brought up the City’s alleys. “Alley’s need to be a top priority,” said McCardle. Currently the City’s alleys are basically not usable. Councilmember Ray Dobbs asked what it would take for the City to get commercial trucks off Woodin Avenue and into the alleys to offload product. He said the Budweiser driver remarked that overhead wiring was an issue. “If we want to move trucks off Woodin, the alleys would have to be one-way.” said Dobbs.

Councilman Tim Hollingsworth
Councilman Tim Hollingsworth stated that during a recent workshop, traffic calming issues were discussed. “I would like to see that included before the Boyd Road (Widening Project).” Other issues of concern are new Cross Walks for the school areas. Youngren said the State would be addressing the crosswalk issue during their Hwy 97A paving project from Lakeside to WalMart.

Dobbs brought up the Chelan PUD Transfer Station that will be constructed up in the Boyd District. “There will be lots of work on Boyd Road,” said Dobbs. “It might be the time to put a sewer line up there.” Most of Chelan Hills is still on septic.

During the 2019 budget session, in addition to their annual funding request of $13,000, Thrive requested an additional $7,000 in funding to assist with transportation costs to and from the Teen Center. Thrive has since received a donated vehicle and is now requesting use of the funds for other purposes.

Executive Director Amy Davis told the Council that the $7,000 would be allocated to volunteer training and other areas. She said that Thrive receives funding from other areas also. The Council voted unanimously to allow Thrive to reallocate those funds.

Erin McCardle asked for help with the annual MOE Mock Council. Wendy Isenhart, Tim Hollingsworth and Ty Witt said they could do it on the morning of June 11.

Wendy Isenhart commented on the Memorial Day event at the Visitor’s Center. She also wondered why Chelan didn’t have a parade float and asked if there ever was one. Dobbs replied that back in the day of the old Chelan Bike-A-Thon, money was raised for Chelan’s float. No one knows where it is now. Dobbs suggested using some 3% money for a new float.

Isenhart is still pushing for a small boat harbor and is concerned that time will run out on the permits before it can be built.

Ray Dobbs remarked that LINK is funding the shuttle service for this year only. He said that Richar DeRock would like to see at least five people per hour using the shuttle. Tim Hollingsworth remarked that Lakeside should have a few temporary parking slots open so people can drop off their BBQ and picnic stuff before parking off site and taking the shuttle back to the park.

Dobbs said he would like to see the City put up  $2,000 to $3,000 to market and advertise the shuttle service. It was noted that the High School has 240 vacant parking slot and the ball fields have another 110 parking spots available.

Ty Witt told the Council that the Rotary Club is planning on revitalizing the area south of the ball fields as a gathering place for BBQs and other events. “We don’t want to step on toes so I’m attending the Eagles meeting right after our meeting,” said Witt.

Tim Hollingsworth remarked that the Watershed Planning Unit would be receiving $460,000 from the Department of Commerce for water rights applications.

Mayor Cooney said that Microsoft is now purchasing power from the PUD and would be visiting the area looking for opportunities in North Central Washington.

City Administrator Mike Jackson and several council members visited a parcel of land that has been for sale for a number of years. Jackson asked Jim Brennan if he could prepare a concept plan for trail access to the property and Brennan stated he could do that for $15,000. Hollingsworth said the property has a lot of recreational value. Witt stated that access would be extremely important and that public opinion would be critical to the City considering a purchase.

Jackson told the Council that he would do his best to bring access possibilities to the next meeting. Other issues are the sales price. “It is open space with water access,” said Mayor Cooney. “I can’t think of something people want more.”

There will be a City Council workshop on Tuesday, June 4.