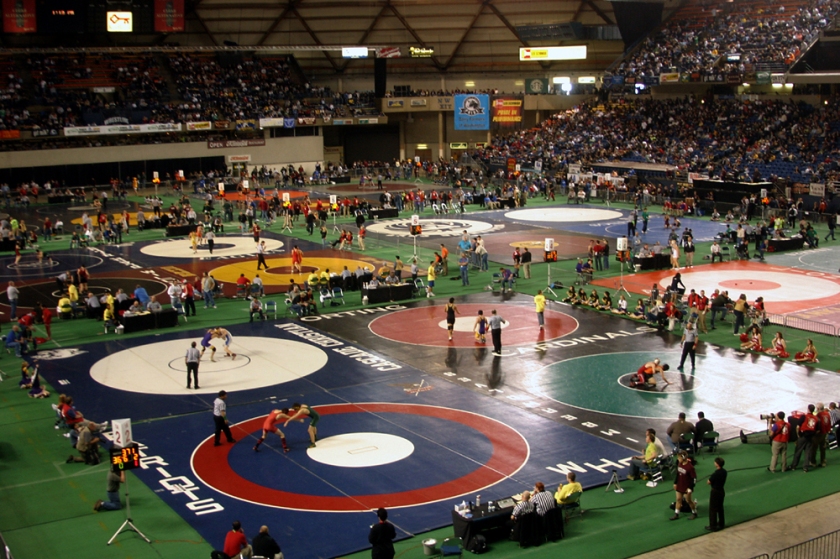 Mat Classic is the largest high school sporting event to take place at one time. Every classification is on the floor at the Tacoma Dome at the same time and the dome is packed with family and wrestling fans. For the high school wrestler, qualifying for this Championship is a highlight of their high school wrestling career.

You can call it the dance… but in  reality it’s a classic… Mat Classic. It is the one wrestling venue where every wrestler in the State of Washington wants to be on February 16 and 17. Mat Classic… the largest single high school championship in the United States. It is where the best of the best of high school wrestlers have qualified to compete. Every classification from 1B to 4A is represented and all are wrestling at the same time to a stadium packed crowd in the Tacoma Dome. Exciting… yes. Daunting… you had better believe it.

Wrestling is a team and individual sport. During the wrestling season, the team works to win tournaments and Chelan did very well this year winning the Caribou Trail League and District Titles but, in the end it comes down to the individual wrestler. This year, out of 12 who attempted to make it to the WIAA State Wrestling Tournament in the Tacoma Dome, only three qualified.

Chelan, who has had a phenomenal wrestling season in the Caribou Trail League and at a number of state wide invitationals this year has three young men who will realize their dream of leaving it all on the mat at the Mat Classic this coming Friday and Saturday.

Chelan took 12 hopefuls to the Regionals qualifiers in Medical Lake this past Saturday and only three qualified to step on a mat in the Tacoma Dome and wrestle for the WIAA 1A State Championship.

Erik Alcala (152 lbs), Braden Williams (160 lbs) and Skyler Gordon (182 lbs) will face the best in their weight classes that the state has produced this year. Four other Chelan wrestlers will travel with the team as alternates including Jaiden Buyas, Javier Pastor, Johnny Ayala, and Bryan Mendoza.

“Everyone who showed up at the Regionals had a chance to make it through,” said Coach Jeffrey Chambers. “Even though it was a tough outing, as coaches, we are super proud of the fight in our young men.”

The preliminary matches at Mat Classic will take place on Friday afternoon and evening. The WIAA brackets are not up yet, but All Things Lake Chelan will post it as soon as it is up. You can follow the matches throughout the tournament as the WIAA updates the wins and losses as they occur.

Good luck to the three young wrestlers hitting the mat on Friday.