Sam Austin and Dillon McCardle got the call against Cashmere and pitched well. Cashmere is a perennial favorite win the CTL Championship and haven’t lost a game yet. Chelan went down 12-1 against the Bulldogs.

It was cold and blustery at Mt. Goat Baseball Field on Tuesday evening as the Chelan Goats (3-4) hosted the Cashmere Bulldogs (6-0).

The Bulldogs got things going offensively in the top of the first inning scoring two runs; one on a fly ball to right field and another runner on a hit to left field with two out.

Chelan couldn’t get anything going offensively in the first inning, giving up two strikeouts and one hit to second base.

Cashmere came back in the second inning to score two more runs with ball hit into the gaps in center and left center field.

In the bottom of the second Gage Estes doubled and drove in Chelan’s first and only run in the game.

The top of the third inning had Cashmere scoring three runs on a fly ball to left/center field with two outs. They scored one more run in the inning before Coach Papasedero relieved Sam Austin on the mound with freshman Dillon McCardle.

Austin pitched well into the third inning, but the defense behind him couldn’t stop the hit balls into the gap that continue to advance and score the Bulldog runners.

McCardle also pitches well but Cashmere is just too tough at the plate and the team’s pitching is superb.

The game ended with Chelan losing 12-1, but the team, as a whole looks very good and the way they are playing, should be real contenders at the end of the season.

The team is on the road over the next several weeks with a doubleheader against Cascade coming up on Saturday, April 21.

In a battle of unbeaten teams…

Cashmere is the defending 1A state champs, and this was a tight matchup that could have gone either way, so we feel very fortunate to pick up the team win.  The girls showed a lot of heart today, and fought through some tough moments.

The Chelan girls remain unbeaten at 7-0 overall, and 3-0 in the CTL.

Cashmere was dominant tonight on the boys side.  Very strong team.

I want to first off say thank you to everyone who came up to Tonasket to root and cheer on our kids in what started out as an overcast day then slowly turned too a chilly night in Okanogan County.

We had one of our small track meets with 8 other schools in attendance. These types of meets allow our students to compete in multiple events and also travel around the NCW area. We had to get a second vehicle cause we had some many kids traveling on our bus. This is a good problem to have for a Track Coach.

We had lots to be excited about. As we start gearing toward our League and District meets in May, we had a lot of kids in some marquee events.

Continuing some success in our Boys Field events were the following. Javier Pastor placed 2nd in the Pole Vault clearing 10 feet.

Bert winning the Triple Jump with a jump of 37 ft and 9 inches. He is looking to reach 40 feet by the end of the year. A new comer, Arnie Castrejon, triple jumping for the first time, jumped 31 ft and 9 inches finishing 4th overall.

On our girls side we had contined success from this past weekends track meets. Ava Dickes started up off with a victory in the 100 meter run. Her time was 13.16, a little off from last weekend. Matea Ivory and Molly Oswald followed up a strong trio performance placing 6th and 7th respectively. Ivorys time was 14.08 and Oswald came in at 14.18. Ava Dickes performed something that most sprinters don’t do often. She not only ran the 200 and ran it well, she also participated in the 800 and won the race. Her time of 2:32.12 places her right in the top 5 in the CTL. She ran a season best in the 200 meter dash with 27.33 and barely losing to a Pateros athlete.

Rosa Lopez also stepped in to run the 200 for one of her teammates and placed well.  She finished 8th with a time of 30.83 seconds also after running the 800 meter run.

We had more strong performances from Matea Ivory and Molly Oswald. They each ran in the 400 meter dash and placing 2nd and 5th respectively. Oswalds time was 1:05.97 and Ivory came in at 1:10.04.

Our team of Ava Dickes, Matea Ivory, Elly Collins and Molly Oswald placed first in the Girls 4×200. Their time of 1:51.19 is a good time with hand offs to work on.

We had a number of kids across the board get some good marks and we are looking to take a small group to Snohomish for the NIKE Eason Invite. This meet not only do you have to be top two on your team for some events, but you also must meet specific standards for your event. We look forward to a good weekend for kids and also so much needed rest as well for some kids this weekend. 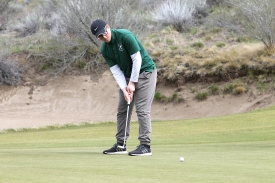 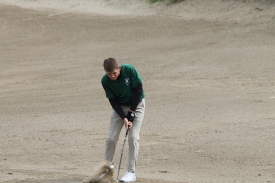 Chelan’s top three boys did well today, shooting 79 (Miles G), 84 (Corbin M) and 92 (Seth H).  The weather cooperated, though a chilly start this morning, and the winds they had yesterday never materialized.  We had 140 boys today and a great field of competition.  We had a hole in one, and the winning team (Everett) shot a team score (4 players0 below 300 (294).  All in all a great day and a great tournament.  A big “thanks” to Amber Finch for running both today’s boys tournament and tomorrow’s girls tournament.