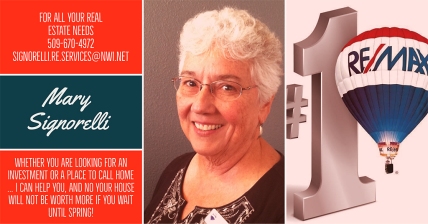 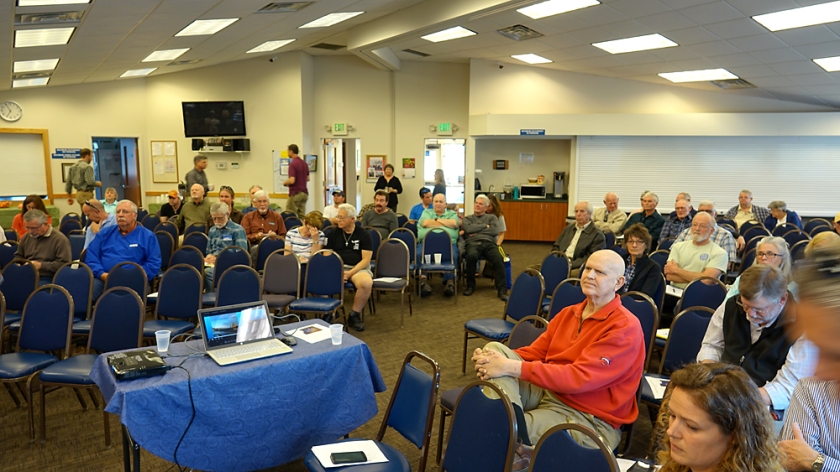 Lake Chelan’s continued water quality was the theme of the City of Chelan’s Town Hall Meeting on Thursday, April 19 at the Chelan Senior Center. 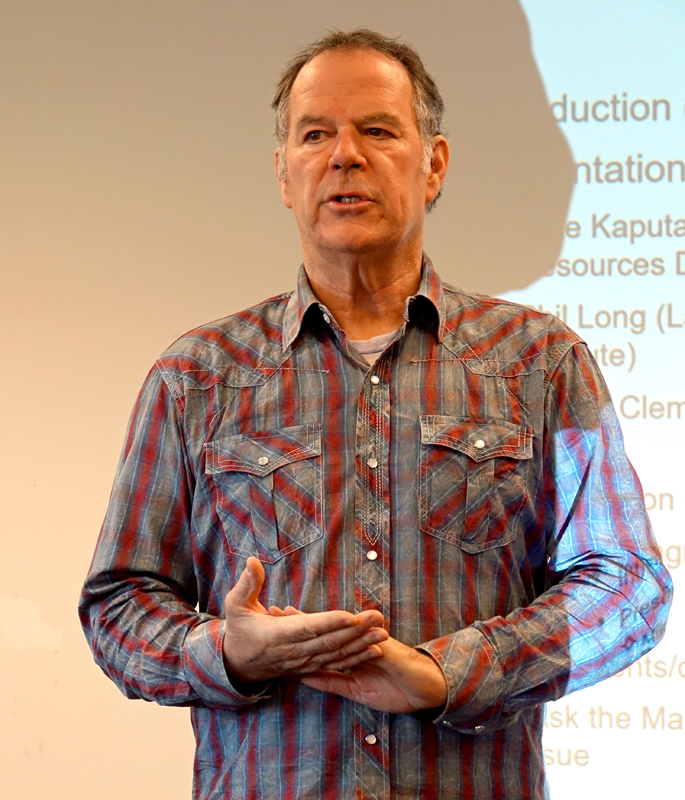 Mayor Mike Cooney  and the City of Chelan hosted the Water Quality Town Hall at the Chelan Senior Center. 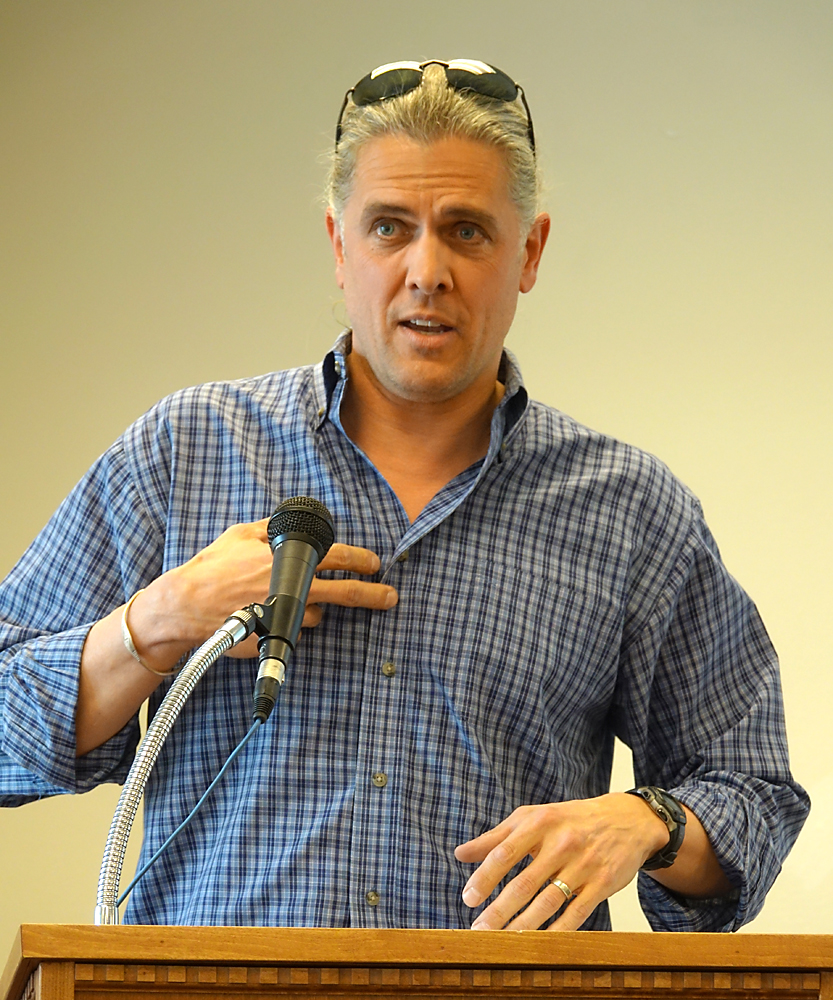 After Mayor Mike Cooney’s introductions, Mike Kaputa, Chelan County’s director of Water Resources and the head to the Lake Chelan Water Planning Unit told those assembled that “We need to understand what is going on in Lake Chelan. It is not too big to fail.” Kaputa stated that the Planning Unit is just now beginning to understand what is going on.

Lake Chelan, as the third deepest lake in the country behind Crater Lake and Lake Tahoe, is considered a national treasure. It is ultraoligotrophic and as Phil Long stated during the meeting, the lake could be considered a slow moving river.

Lake Chelan is fed from numerous tributaries with the Stehekin River and Railroad Creek being the major sources of inflow.

Kaputa stated that the long term goal is to begin a long term monitoring program for water clarity; to investigate the aquatic invasive species potential of non-native plants, animals and pathogens, and to try and find out if they can even survive in Lake Chelan.

Because Lake Chelan is a reservoir controlled by the PUD, plants like Eurasian Water milfoil tend to die off in the winter when the water recedes due to power production at the Chelan dam.

Whatcom County has an aggressive boat inspection program where every boat, motorized and non-motorized is checked for invasive species and currently spends about $500,000 each year to keep invasive species from entering their waters.

While Lake Chelan doesn’t have a program yet, there is talk about beginning an inspection program at each boat launch on the Lake. 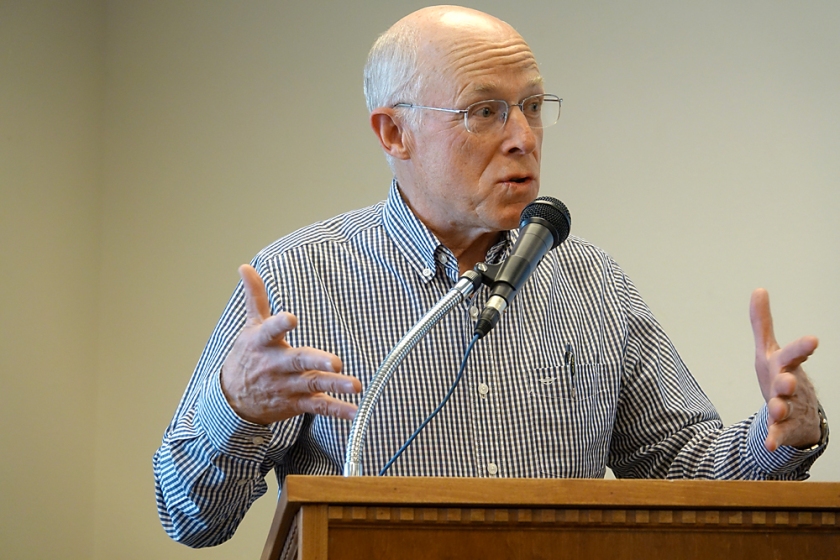 Phil Long, PhD, is the Director of the Lake Chelan Research Institute

Phil Long, director of the Lake Chelan Research Institute, gave a scientific presentation of where monitoring of lake conditions has been over the years and what the long term monitoring program is planned in the future. “It’s going to take the community to help fund this,” stated Long. Oregon State University and the National Science Foundation are supplying some funding.

Long said that the long term monitoring was being conducted by students at Manson and Chelan schools, and that Chelan County Sheriff’s Department is allowing the use of its marine patrol boat for sampling services.

Phosphorus and Nitrogen loading are two major indicators of what is happening in the lake. Most phosphorus and nitrogen come from natural sources and in 2017, phosphorus loading jumped from the normal 2.6 to 4 ug/l (µg/L. micrograms per liter) levels to a massive 20 ug/l level after the Wolverine Fire. This level of phosphorus was measured between May 17 and August 17, 2017. Another factor in this high measurement could have been Pine Pollen deposition into the lake.

“If we get a lot of phosphorus, we are going to get a lot of algae,” said Long. Algae growth has been observed on rocks along the lakeshore in recent months. The question is whether or not the lake has undergone some sort of transformation.

Back in the 90s, the Department of Ecology stopped the Lake Chelan Sportsman’s Association’s net pen operation at Field’s Point because of phosphorus loading from the juvenile salmon defecation. That operation was successfully moved the Chelan River by the powerhouse. 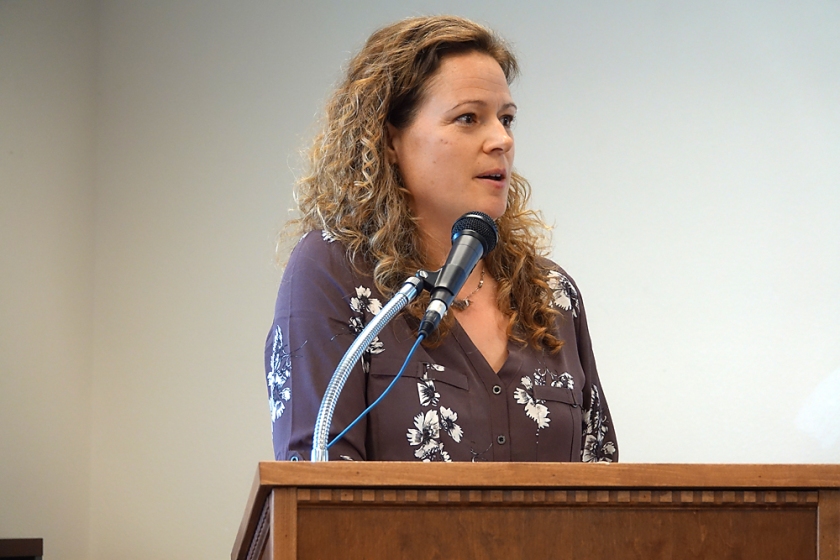 Under the new 50 year license, the PUD is required to maintain the following license requirement on Lake Chelan: 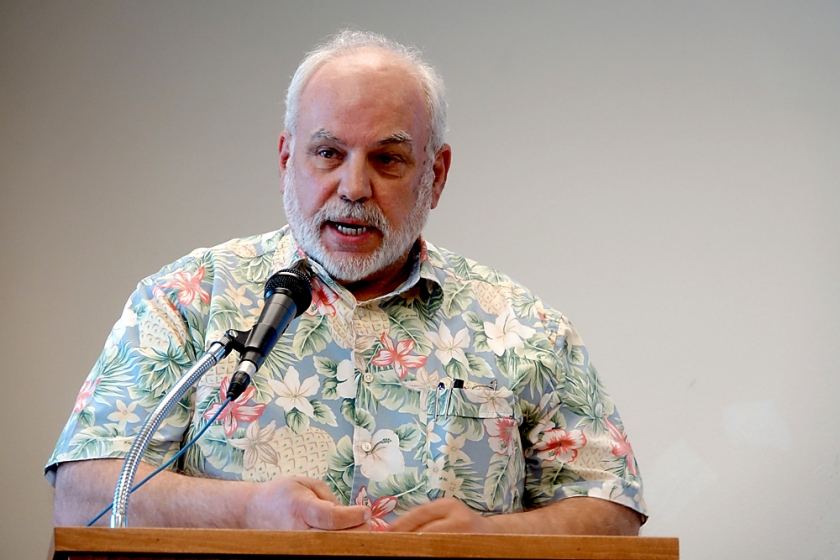 John Olson, Friends of Lake Chelan, would like to see the City of Chelan purchase the Three Fingers property for public access.

John Olson, Friends of Lake Chelan, presented an outlook on growth in Lake Chelan. He stated that the Chamber of Commerce reports over 2 million visitors a year are coming to the lake and that they are spending $420 million dollars. “We all use the same water source and sewer system, drive the same roads, use the same electrical systems and access the same parks,” said Olson.

The Three Fingers, owned by GBI (Goodfellow Brothers) was just released from the court system for development. GBI has a development plan for the fingers that includes 54 condominiums and 300 boat slips However, Olson would like to see the City of Chelan purchase the land under an general obligation bond for the public’s benefit.

Jake Youngren, Assistant Public Works Director, commented on the City’s public works including the existing septic systems. “They (Chelan Hills) do monitor their septic tanks and at this time there is no affect on the lake,” said Youngren. 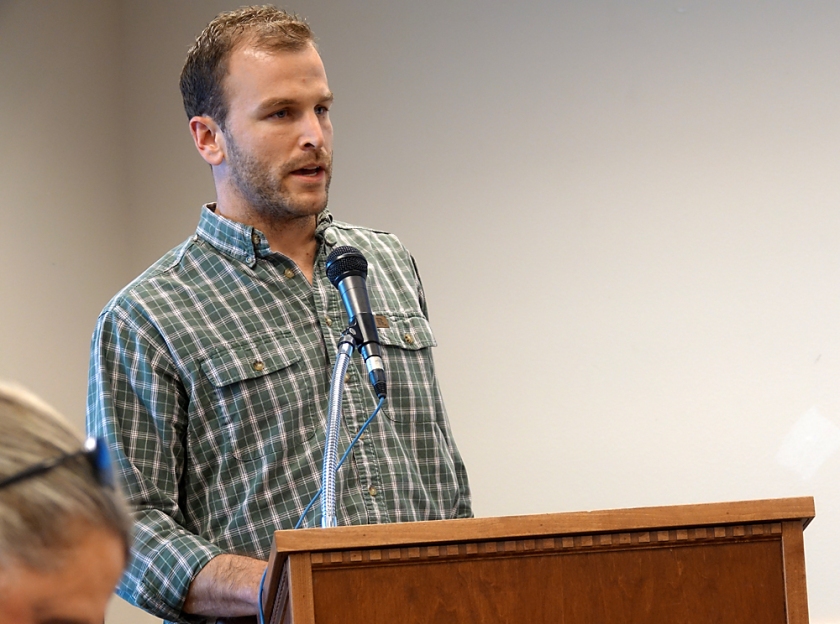 The Lake Chelan Valley has 100 miles of sewer line feeding the sewer treatment plant on the Columbia River with peak flows in the summer reaching 1.3 million gallons per day.

Domestic water treatment in the City of Chelan and Urban Growth Boundary reaches 42 million gallons per day. All of the City’s production chemicals used in the process of treating domestic water is discharged to the sewer system for treatment. “None of those chemicals ever goes into the lake,” stated Youngren.

More problematic to lake quality, however, is the storm water sewer system. According to Youngren, storm water pollution is treated at the outfalls by sedimentation tanks and oil/water separators.

Councilman Tim Hollingsworth asked if there was a plan to check boats at the PUD, County and City boat launches. Long replied, “We need to do a risk assessment real soon.” He said that Whatcom County charges $50 to launch a boat into Lake Whatcom. NOTE: To date Zebra and Quagga mussels have not been introduced into the State, but the impacts of these invasive species to the water treatment facilities, dams, pumps, irrigation intakes would be economically devastating. 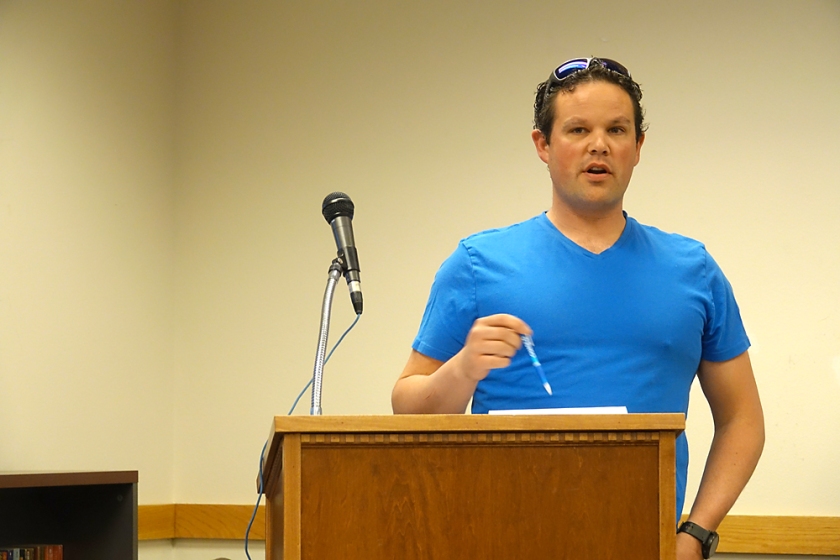 Shawn Sherman, a Lt. at the Chelan Fire Department has taken matters into his own hand and has been picking up garbage on the shoreline of Lake Chelan and says he will continue that work throughout the summer.

Shawn Sherman, a Lt. at Chelan Fire and Rescue, was asked to speak about his efforts in keeping Lake Chelan clean. He has been walking the beach along Riverwalk Park picking up garbage. Since he began, he has collected over 100 pounds of garbage off the shoreline.

“There is garbage everywhere,” said Sherman.

Sherman, who has also started Pilgrim Lake Services, plans on creating a platform to collect garbage from underwater around the lake. The plan includes continuing work at Riverwalk Park in April and May. Then in May and June he plans on working the area from the Woodin Avenue bridge uplake. In July and August he will be diving the public docks and then moving uplake. 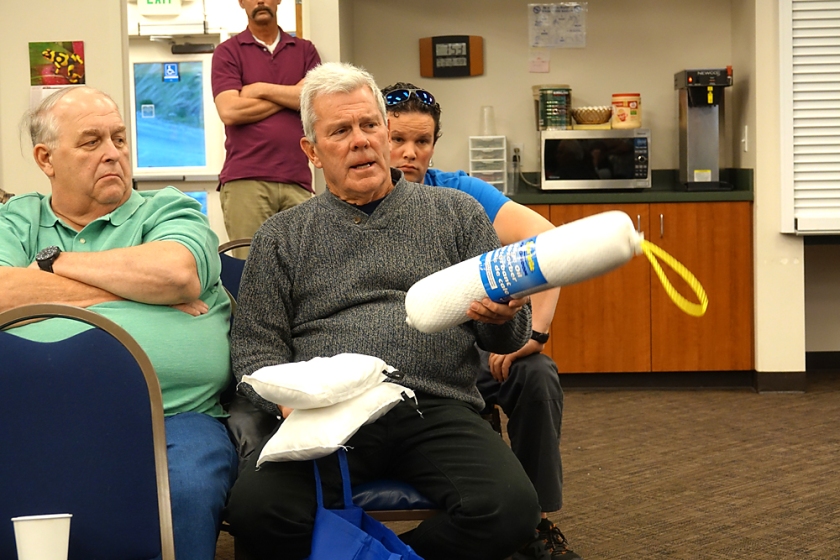 Scott McKellar explained that every boat moored at Sunset Marina is required to have absorbent pads placed in the boat’s engine well to soak up any oil or gasoline. 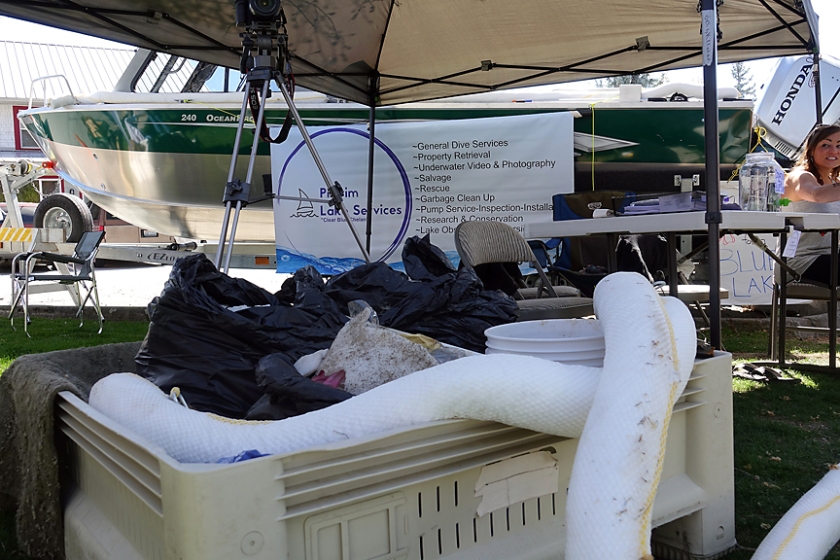 Shawn Sherman, who has started his own company (Pilgrim Lake Services) was at this year’s Earth Day Celebration with the 100 pounds of garbage he has picked up off the shoreline in Riverwalk Park. 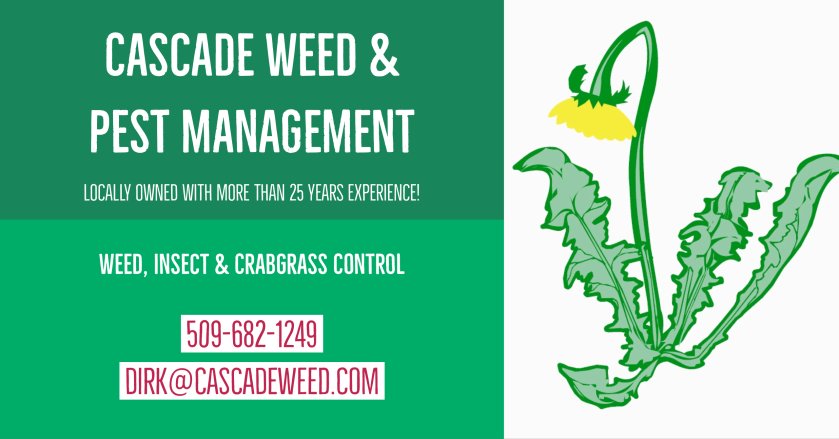