Chelan’s Lady Goat Volleyball season came to an end at Yakima’s Sundome on Saturday afternoon when they played for the 7th or 8th place trophy against Lakeside. 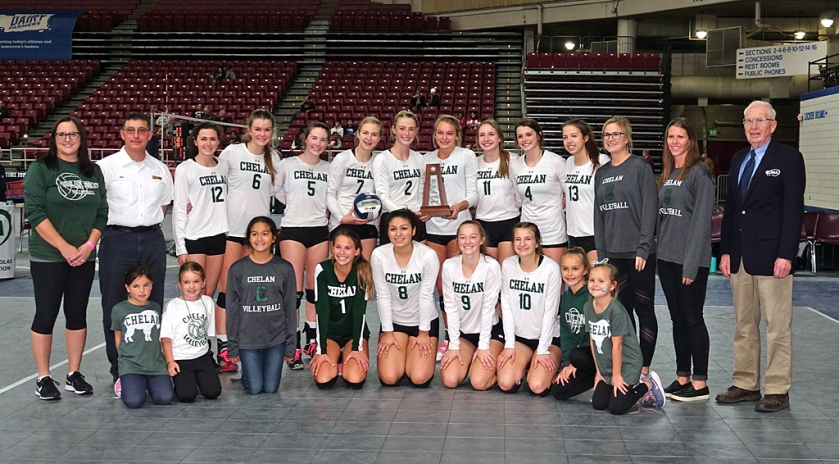 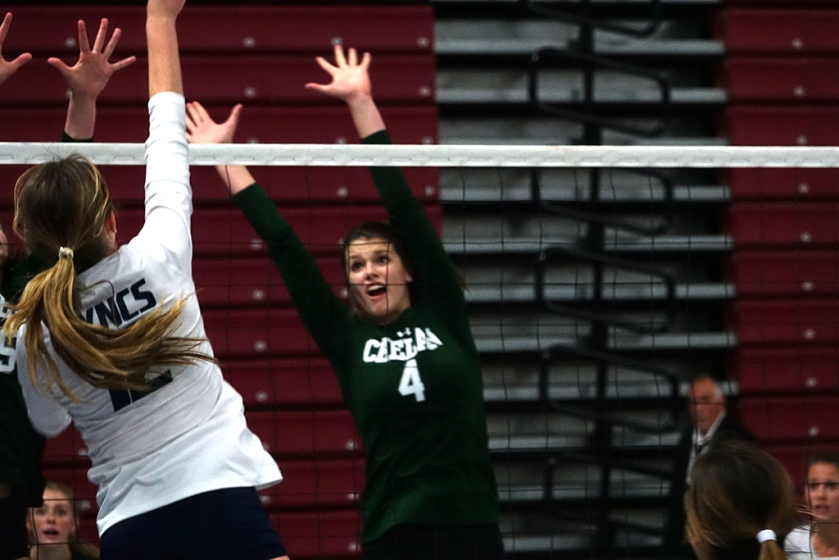 Sophomore Katie Rainville had 10 blocks during the tournament.

They had a chance to win the fourth game when they went from a 16-16 tie to a 19-16 lead. Lynden Christian came back to trail by only one point, 24-23, but Chelan couldn’t close it out and the Lyncs won 26-24 putting Chelan into a fifth game which didn’t go well for them at all and they lost 7-15. 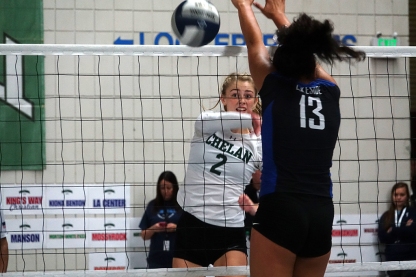 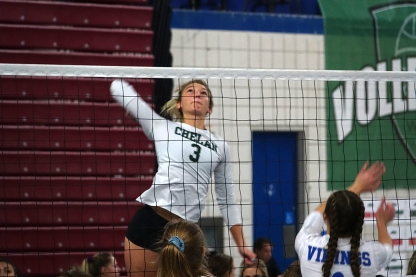 Emma McLaren,#2 and Lexie Gleasman, #3 had a combined total of 133 kills during the State Tournament. Click on the images for a larger view.

This was considered by many to be the championship game. The complaint by many, including WIAA officials on the floor, reporters, parents, coaches and other fans, was why would two potential State Champions be pitted against each other in the first match of the tournament.

The loss in their first outing put Chelan in the consolation bracket with the only possible outcome being 7th or 8th place. 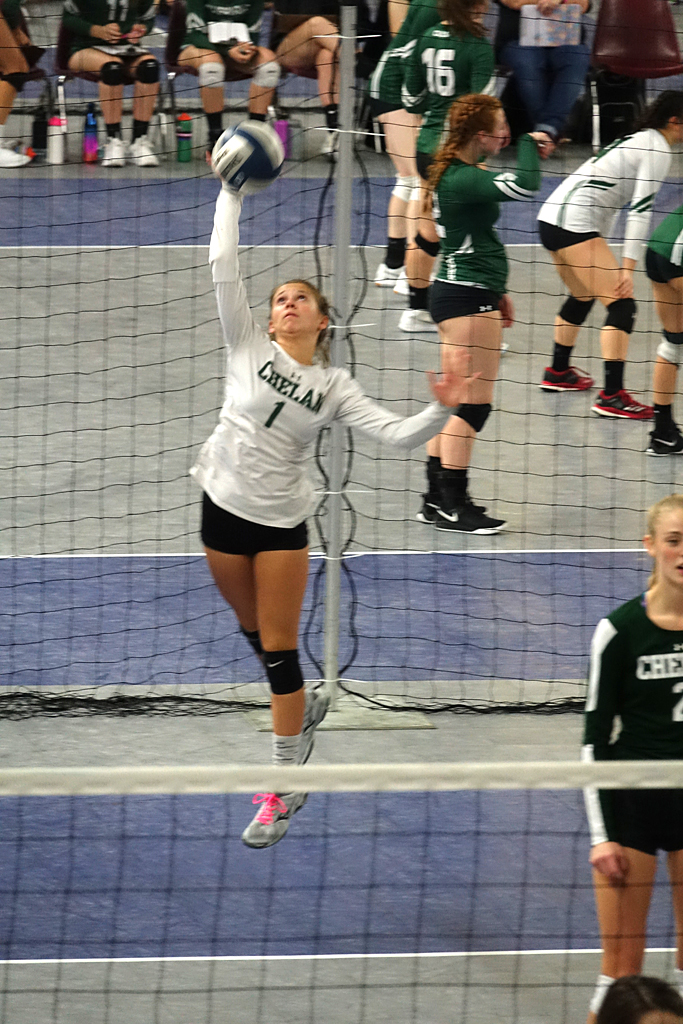 Freshman  Libero Morgyn Harrison was 71/2 at the service line and dug out 27 balls during the tournament.

As disappointed as they were, the Lady Goats worked their way out of their disappointment and came back to defeat each team they faced in three games. First it was Kiona Benton who went down 25-15, 25-12, 25-19.

Bellevue Christian was a little tougher match but Chelan closed them out in three also 25-19, 25-18, 25-12 which placed them in the final trophy round for that 7th place which they succeeded in capturing 25-15, 25-23, 25-11. Lakeside was a very well disciplined team, but Chelan, who had defeated them earlier in the season, only had one game where they were challenged. 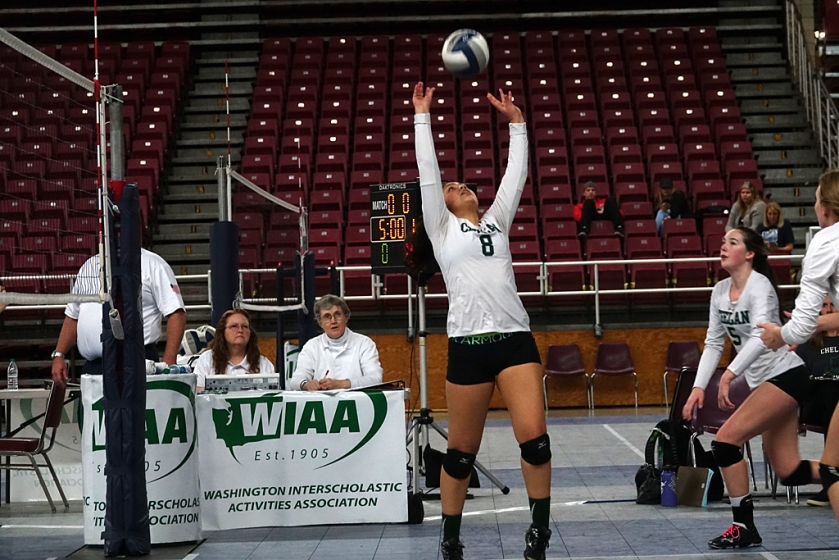 Sophomore Xitali Cruz combined for 72 assists  and 23 digs during the tournament and had only one missed serve.

Senior Lexie Gleasman finished up her high school volleyball career 64 kills and 49 digs over the tournament play. In game one against the eventual State Champion Lynden Christian, she had 21 digs.

Lexie’s leadership throughout the season has led to the tremendous success this team has had in her senior year. The rest of the team are juniors, sophomores and freshmen along with Sierra Shively as the other senior on the team. 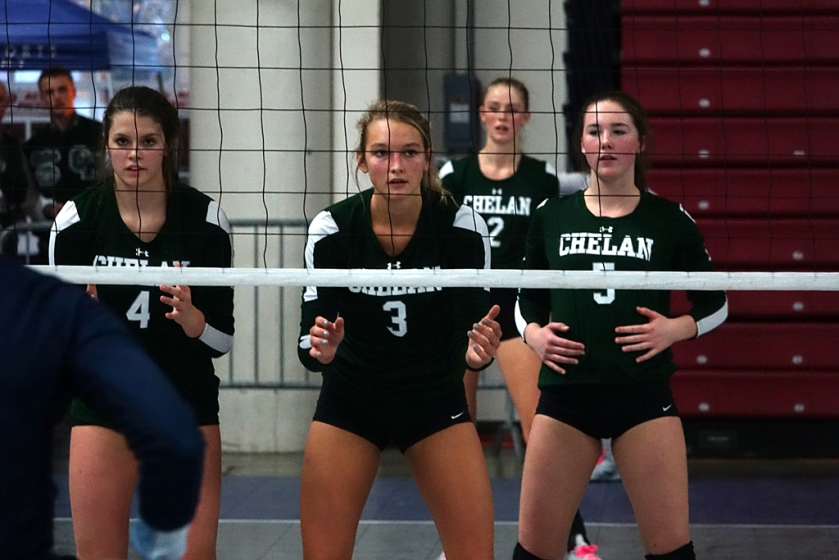 Tough on hitters at the line. From left to right are Katie Rainville, Lexie Gleasman and Elly Collins. 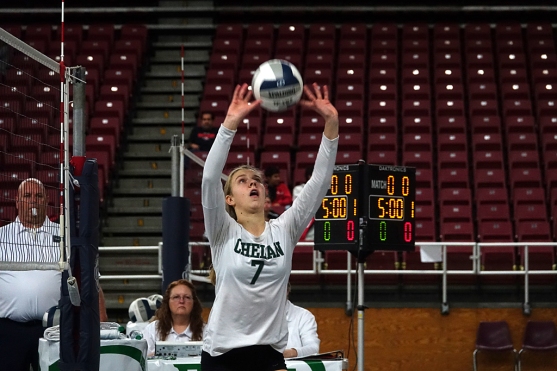 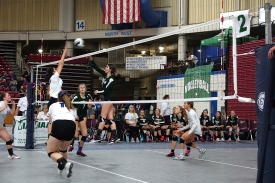 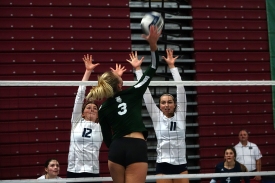 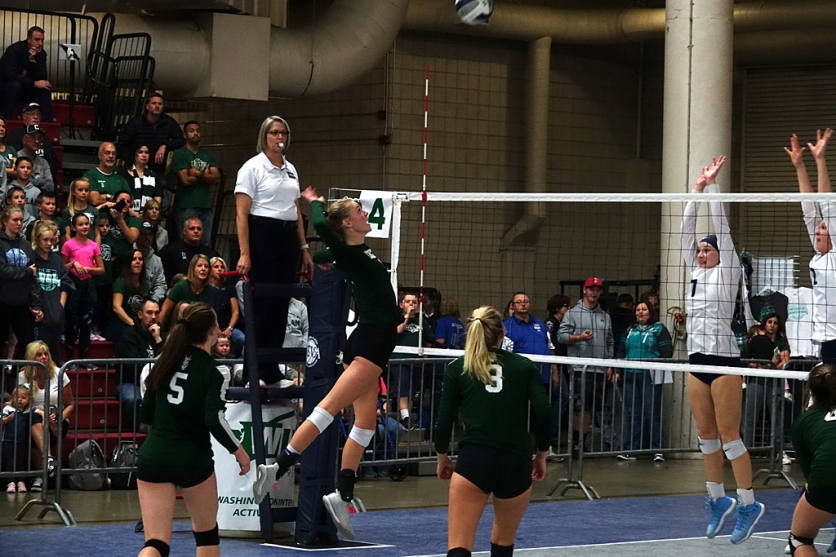 Leanna Garfoot #7, had a great tournament,
setting the ball for the team’s hitters 84 times

For the most part, these girls have been playing volleyball together since they were youngsters, and with the advent of Club ball and Sand Volleyball, they have all nailed down the fundamentals of the game from the front row to the backrow.

As Chelan (Coach of the Year) Coach Jenifer Rainville says. “We will return next year.” As a team, the Lady Goats ended the season with a 19-2 record. “We faceda very tough first round team,” said Rainville.

Chelan and Lynden Christian played what was arguably the best match of the entire tournament. Chelan lost two of the five games and went on to win every match from that point on in three games.

While the loss put Chelan into the consolation bracket, Lynden Christian went on to win the State Title. “We were the only team able to take any sets from the Lyncs,” said Coach Rainville.

“I want to thank the players for a great season, the parents and the community for all their support and our awesome green zone that continued to cheer us on all season,” said Coach Rainville.

A big thank you to all of All Lake Chelan’s sponsors. Without your support, we couldn’t have covered this State Tournament.