Residents on Lake Chelan’s south shore have for the last 20 years been paying $45 a month for sewer services provided by the South Shore Sewer District. At its regularly scheduled meeting on Wednesday, May 20, the commission discussed at length a rate increase for the 330 users on the District.

The City of Chelan, which operates the sewer treatment plant that the district’s wastewater flows to, is planning an upgrade of its Lift Station #5. This planned maintenance item will cost $1.5 million of which the District is on the hook for one-half of the cost. “It is a maintenance item and necessitates our rate jump dramatically,” said Mark Babcock, chairman of the district’s board of directors. 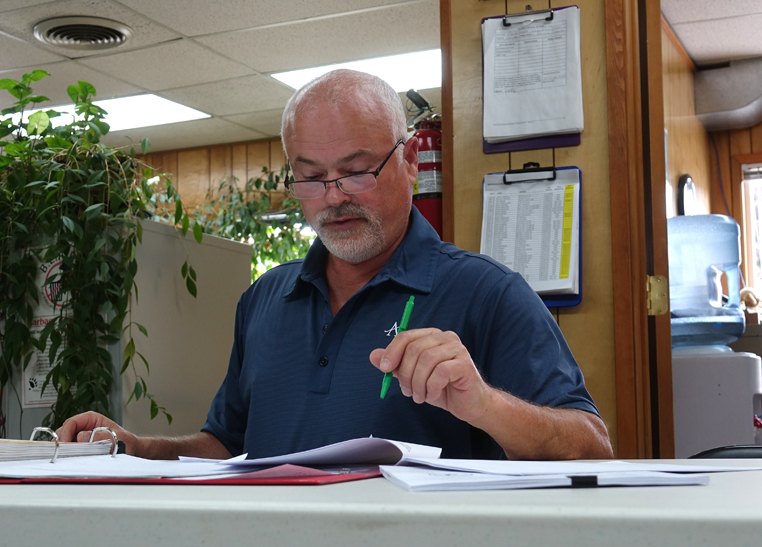 Mark Babcock, chairman of the South Shore Sewer District went over the financial issues facing the District at its May 20 meeting.

That jump could be a combination of a number of scenarios, but will probably raise the District’s user rates from its current $45 to $79 per month with a potential six percent raise each year until the District is at $118 per month. “If we jump to $79 a month and then start increasing monthly bills by six percent a year, by the time we need the new force main, the money is there,” said Babcock.

Other revenue sources for the District were also discussed. For instance, two LIDs (Local Improvement District) are expiring in 2022 and 2023. This could bring in an additional $200,000 to the District’s coffers from Chelan County.

Chelan City Attorney, Quentin Batjar, suggested that the District needs to give notice to its rate payers, but with the pandemic, holding a public meeting is impossible. Steve Thornton, the City of Chelan’s finance director stated that the Lift Station project is a big capital project that could be pushed out one or two months, but Babcock replied that the community could still be in lockdown by August.

Andy Baker, FCS Group, said that Thornton was spot on, but that the bottom line is not changing and $79 per month would bring in $26,000 a month. Baker offered to prepare a scenario to give the board a choice of how to proceed at the next board meeting in June. Babcock suggested that they could call a special meeting if necessary. 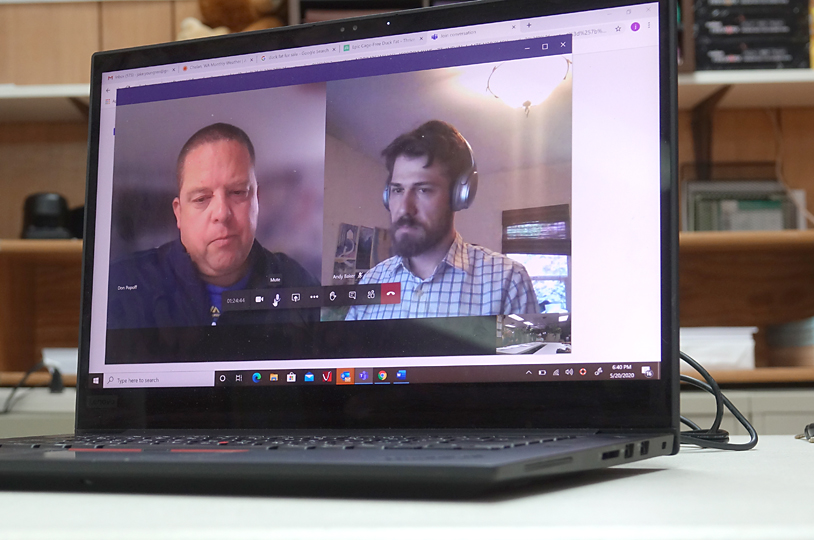 Andy Baker, FCS Group (right on screen) offered to prepare a rate increase scenario for the District Board to consider at their next meeting. Don Popoff, RH2 Engineering, (left on screen) will be conducting a new ERU survey
of the District’s rate payers.

Babcock also asked about retaining an attorney for the District. Thornton said, “In all the years I’ve been in finance, the best advice is to listen to your lawyer.” Batjar, who is the City’s attorney, withdrew from representing the District because of a potential conflict of interest between the two entities. “He can’t represent both,” said Babcock. Batjar did give Babcock the names of several attorneys who have municipal law backgrounds.

“Once we find an attorney, we will bring him in an introduce him,” said Babcock. He asked the rest of the board to give him permission to retain an attorney, get him up to speed on the issues, and then enter into a written agreement. They concurred.

With a definite rate increase coming the board discussed several different scenarios to consider:

The South Shore Sewer District has the capacity of 800 ERUs leaving 480 ERUs in theory. With the pump station upgrades needing done the District needs to find out how many, if any ERUs are pending, before giving ERUs to a new 100 lot development proposed by the Evans family who have asked to be annexed into the system.

“We cannot annex in more until we know how much excess capacity you are going to use,” Babcock informed Luke Evans who was in attendance.

Don Popoff, RH2 Engineering was authorized to conduct a survey of the existing ERUs in the system including an audit of all the District’s accounts, looking at properties and looking at the possibility of bootleggers, i.e. RVs, Condominiums in full use, wineries and other commercial operations.

The survey will also include getting the County Building Department to give the District its plans on properties. The third piece of the survey will look at how many connection fees will be coming up in the future.

The District has had a conference call with the Chelan County Planning Department and Chelan-Douglas Health District on Code Compliance and enforcement options. “Community Development has to do the enforcement,” said Babcock.

It was mentioned that KARMA KANYON (Karma Vineyards) allegedly does not have a valid sewer connection and that they did not obtain permits for their kitchen and no building inspections done. The sewer district told the Planning department that they expect compliance. “It looks like the County is going to take a hard line on this,” said Babcock.

Public Works Director Jake Youngren (left) discussed the plans to run a video survey of the District’s sewer lines and laterals to find potential blockage areas. Grease is suspected, but until this is confirmed by video the facts are unknown.

The District is paying for a video survey of the sewer line and its laterals for grease and should have the results by the next meeting. City of Chelan Public Works Director Jake Youngren said that the problem is having hard facts. “We suspect an old lateral that is undersized,” he said.

The District’s next board meeting will be on Wednesday, June 17  at 5 p.m. at the City of Chelan Public Works offices located at 232 E. Wapato Avenue.