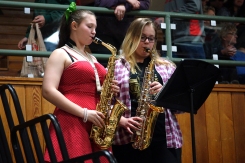 Joe Harris, Chelan High School Health and Fitness Teacher, has been instrumental in keeping this particular scholarship funded through the “Turn Back the Clock” RETRO Basketball game that takes place in the Community Gym. This year, according to Joe, the fund raised $300.00. 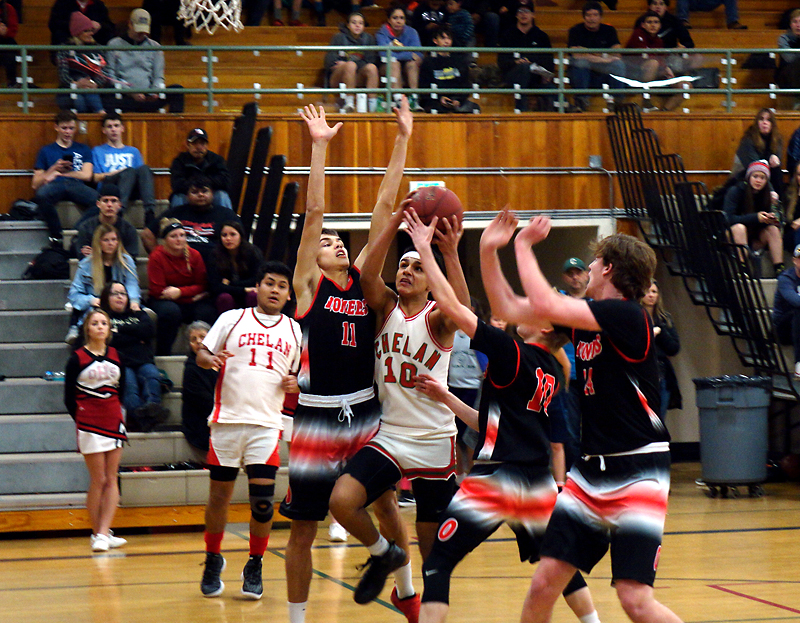 Chelan Goats against the Omak Pioneers

The Goats held their own against a hard charging Omak Pioneer team, but in the third quarter of play, after the Goats has worked back to a 5-point deficit after being 10 points down, they fell apart defensively in the early going allowing the Pioneers to build a substantial lead. By the end of the third quarter, Omak had taken a 56-39 lead and never looked back.

With 5:17 to play, the Pioneers were up 60-46. In the late minutes of the game, Connor Wilson began to score from outside, but it was too little too late and he ended up with a respectable 13 points on the night. Guard Bert Mendivil was pretty much unstoppable on the drive and he led the Goats with 19 points. Quinn Stamps added 9 points  and Gage Estes came off the bench and grabbed 10 rebounds for the Goats.

Omak’s Kanen Ables led all scorers with 20, followed by Raven Boyd who added another 15 and Tre’ Marchand who ended up with 10 points.

Chelan is back on its home court this coming Thursday evening against the Cashmere Bulldogs. This should be an interesting game. Cashmere and Chelan have split games in their last two outings with Cashmere getting the best of Chelan in the last outing at Cashmere.

Probably the best game Chelan has played all year was in the Toyota Center when they beat Cashmere in overtime. Coach Pearl would love to see the team put together a solid 32 minutes of play this coming Thursday night which is also Senior night for the team.

The Lady Goats came up short against the Omak Lady Pioneers in the final two minutes of an exciting basketball game. By the end of the first half, the Goats went to the locker room head of Omak 30-23. By the end of the third quarter, Omak had come back and taken the lead 40-37.

It was the fourth quarter that was the deciding factor in this game. Both teams battled for the lead and with 5:13 remaining to play, Chelan was ahead by two, 44-42, but one and one-half minutes down the clock at 3:39 and both teams were tied up at 45 each.

From that point on Omak went on a seven point run to take a 52-46 lead and never looked back. With only 41 seconds to play the Goats desperately tried to get back in control and almost tied the game at the buzzer when Lexie Gleasman attempted an off balance three pointer that missed the basket. The game ended with Omak taking home the 55-52 win.

“It was a great game overall,” said Coach Steve Nygreen. “Our offensive tempo was better and we shared the ball. We lost our focus in some key moments in the fourth quarter.” Nygreen feels that the game was a great building block for the playoffs. “Our effort and intensity is growing more and more consistent.”

The Lady Goats host State Ranked Cashmere this coming Thursday evening with tip-off at 5:45 p.m. The Lady Bulldogs are coming into the game at 11-0 (18-1 overall)